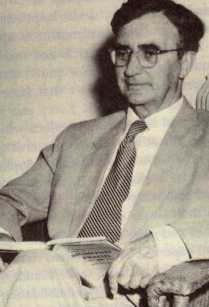 George Humphrey was born in Kent, England on July 17, 1889. He attended Oxford for Classics, and then - in what would today be considered a dramatic shift in scholarship - studied psychology at Leipzig, where he worked personally with Wilhelm Wundt.

Humphrey then travelled to the United States and obtained his PhD in psychology from Harvard University in 1920. He taught for four years at Wesleyan, then came to Queen's to become the Charlton Professor in Philosophy, a position which had just been vacated by John Watson.

George Humphrey was extremely interested in human nature. There is a story that when his daughter was born, he held her out the second story window "to see if she would register fear."

On his arrival at Queen's, Humphrey began to increase the number of psychology courses in his department. When he set up a laboratory of his own, he brought the study of experimental psychology to Queen's. While he was head of the department, graduate courses in psychology began to be offered.

George Humphrey's most important book is called The Nature of Learning.He wrote seven others on various topics, including two novels under an alternate pen name.

During his time at Queen's, Humphrey's research focused mainly on habituation, apparent movements, audiogenic seizures, and reinforcement. During WWII, he helped to develop personnel tests for the military.

George Humphrey left Queen's in 1947 to take up a professorship at Oxford as well as the Directorship of their newly founded Institute of Experimental Psychology. He retired in 1956 and spent the rest of his life at St. John's College, Cambridge.

Humphrey Hall is named in his honour.