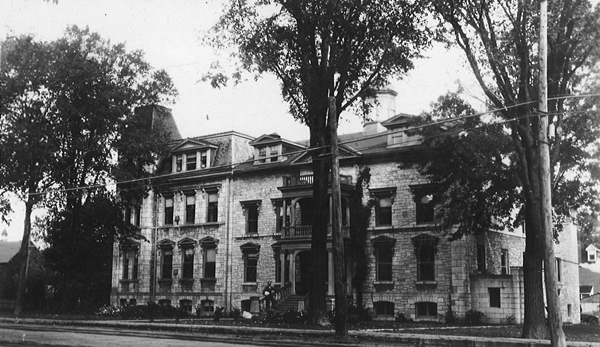 Located at the northeast corner of University Avenue and Union Street, the John Deutsch University Centre (JDUC) is used by students, staff, faculty, and alumni for a variety of purposes. It houses the Alma Mater Society (AMS) offices, the Queen's Pub, Alfie's, the Memorial Room, and was the original home of the Common Ground before it moved to the Queen's Centre.

The centre is located on the site of Kingston's old Orphan's Home, a large and handsome building constructed in 1862 that was purchased by Queen's in 1927 to serve as the Students' Memorial Union, named in commemoration of students who died during the First World War.

The early Union was essentially a men's club, housing a cafeteria, meeting and reading rooms, and student society offices - almost all of which were closed to women. After the building was destroyed by a serious fire on September 4, 1947, the main part of the present JDUC was constructed in its place with the help of a large donation from Col. R.S. McLaughlin. 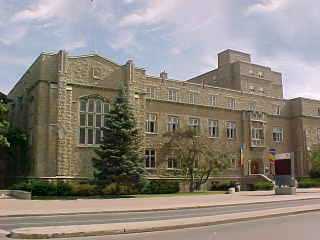 Even in the new building, women were initially permitted only in business offices, including those of the Queen's Journal and AMS, and in the "Co-ed Lounge," a room just off Wallace Hall known today as the Polson Room.

Beginning in the mid-1950s, women were permitted to enter all parts of the building, except for Wallace Hall, which remained off limits except during formal dinners until 1960.

The Union was extensively renovated and expanded in the mid-1970s in response to the tripling of the student population since the 1950s. It was renamed the John Deutsch University Centre at the same time in honour of former Principal John Deutsch, who died in 1976.

At the heart of the JDUC is the ceilidh, a large open space where members of the community gather for concerts, performances, debates, and displays.