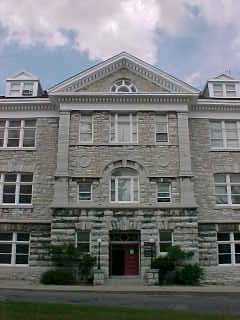 Kathleen Ryan Hall has been standing for almost 100 years, but its present function and name are relatively new developments in its history. Built in 1907, it was originally called the "New Medical Building," built to accommodate the Department of Medicine, which had outgrown its home in the Old Medical Building.

The building continued to be used for medical purposes for many years. During WWII, Queen's professors working for the Canadian government used the building in their research on the use of anthrax and botulism in biological warfare, a fact that was kept secret for decades. Guards posted at the building were ordered to shoot trespassers (see Wartime at Queen's).

In 1981, Queen's graduate (BA 1926) and university Councillor Kathleen Ryan donated the funds required to renovate the New Medical Building and turn it into a home for the university archives.

The archives were a long standing institution at Queen's but had until that time been housed in the Queen's libraries where there never seemed to be enough space. There had been a full-time archivist at Queen's since 1960 and when Kathleen Ryan Hall re-opened in 1982 as the new home of the archives, it was a strong step forward for the preservation of history at Queen's.

Aside from university records, the archives hold records for the City of Kingston, the personal papers of many alumni and faculty, and the papers of some famous Canadian artists and politicians. There are extensive photograph collections, sound recordings, videos, and artifacts from the University and Kingston communities.

Kathleen Ryan Hall makes up the north end of the historic medical quadrangle.