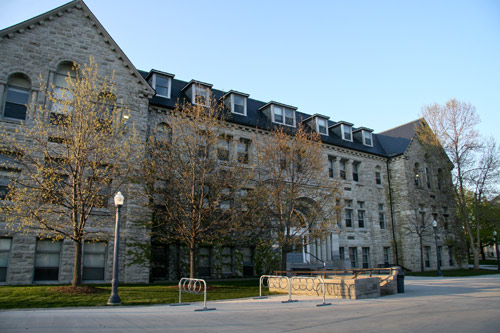 Completed in 1903, the funding for this hall was donated to Queen's by the City of Kingston to provide much-needed classroom and library space for the Faculty of Arts and Science. Officially named for the city, it was long known instead as the New Arts Building to distinguish it from the Old Arts Building next door, now known as Theological Hall.

Kingston Hall was designed in the Victorian Romanesque style by Symons and Rae, an architectural firm from Toronto.

Along with the attached Grant Hall, Kingston Hall served as a military hospital during the First World War. During the Second World War, it was used as a training barracks for attendees of an army course in 1943-1944 (see Wartime at Queen's).

The building was seriously damaged by smoke and water in 1931 after a fire that began when a student left a smouldering cigarette butt in the women's washroom. Citizens of Kingston donated the money for the repairs. 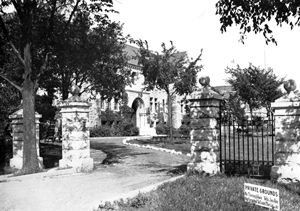 Built in 1917 and torn down in 1925, this one-storey wooden building served as a kitchen and dining room for the military hospital that was located in Grant Hall and Kingston Hall during the First World War. After the war, it served as a cafeteria for staff, students, and faculty, and was commonly known as Marshall Reid's restaurant, after its proprietor.

The annex was located between Kingston Hall and Theological Hall.