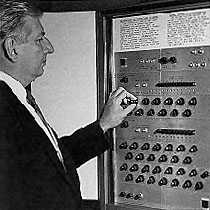 Hugh LeCaine was raised in Port Arthur, Ontario, now known as Thunder Bay. Throughout his youth he studied the piano and began experimenting with electronics and musical instruments at a young age.

LeCaine attended Queen's and received his MSc in 1939, after which he went on to work for the National Research Council (NRC) in Ottawa, where he worked for the rest of his life. Initially, Hugh LeCaine's research at the NRC was exclusively in science and he experimented with electronic music only at home in his spare time. LeCaine did extensive research on radar technology, and designed the first automatic pattern recorder. He also helped develop the forerunner of the Van de Graaff nuclear accelerator.

LeCaine invented the electronic Sackbut in 1945 - only one of the many new instruments he was to invent during the course of his work. In 1954, he was allowed to make his musical research a professional activity and began working on electronic music at the NRC.

Lecaine's research is considered as one of the main influences in the development of the synthesizer. He taught at both the University of Toronto and McGill University and was much in demand as a lecturer all over Canada. He also ventured into composing and his best known work is called Dripsody.

Hugh LeCaine was granted an honorary LLD by Queen's in 1974.

Harrison-LeCaine Hall is named in his honour.