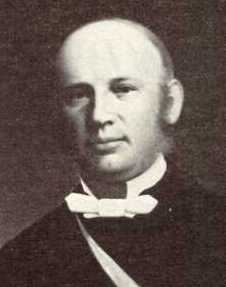 The Rev William Leitch had a short but turbulent career as Queen's fifth Principal (1859-1864).

Leitch was recommended to the Trustees of Queen's by the Colonial Committee of the Church of Scotland as a suitable man to head the young College in Kingston. When he arrived in Kingston in 1859, Rev Leitch was the first full-time, permanent Principal at Queen's since 1846. Since the departure of Thomas Liddell in that year, there had been one acting Principal and two Principals who took on the job only as a temporary measure until someone who actually wanted the position could be found.

Leitch was the first Principal since Liddell to arrive with any real enthusiasm for the job (the others had only accepted reluctantly because no one else would take on the leadership of this small, poor, and fractious college), but he came at an unfortunate time. His first year was dominated by a fierce, though ultimately successful, struggle to pry more funds from the government. He was successful in the end, but the frequent trips to Toronto that were required for business were resented by some members of the faculty, especially the notorious Dr. Stewart.

Soon afterwards, in 1861, a long quarrel between former acting Principal James George and Professor George Weir came to a head, resulting in George's resignation and Weir's dismissal. In 1862, a controversy concerning Kingston General Hospital and the Queen's Medical Faculty resulted in Dr. Stewart being let go, and he proceeded to launch a defamation campaign against the University in a small newspaper he ran called the Argus. He attacked Leitch personally, calling him "a bungling arch-blockhead" in print. Even more trouble arose over the unification of the preparatory school run by Queen's and the Kingston Grammar School.

Leitch also found himself unpopular with the faculty after supporting a new set of bylaws they felt gave the Board of Trustees too much power, including the right to terminate the employment of professors. Several promising professors resigned in protest at the way this affair was handled.

But his term had some bright aspects. It was under his leadership that the Kingston Observatory - the first in the province - merged with Queen's, providing a new stronghold of scientific progress at the university. And he also presided over the creation of a Faculty of Law at Queen's, which unfortunately folded (temporarily) around the time of his death.

Perhaps because of all the turmoil in Kingston, Leitch never settled permanently in the city, but returned to Scotland each summer with his two sons, whom he was raising alone. Leitch's health steadily declined over his years at Queen's and he died of heart disease in 1864, while still in office.

By 1867, two memorial scholarships were set up in Leitch's name: one in Theology and one in Arts.