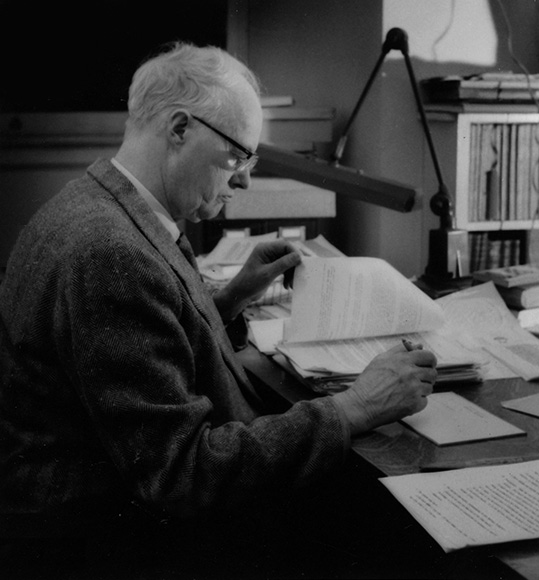 Lower was one of Canada's foremost historians and one of the most formidable personalities at Queen's in the post-war years. He was a strong and opinionated man, well known across Canada for his commentaries on current affairs as well as history.

Lower was born in Barrie, Ontario, and educated at the University of Toronto and Harvard. He taught Canadian history at Wesley College, Winnipeg from 1926 to 1947 and was Douglas Professor of Canadian History at Queen's from 1947 to 1959.

Lower wrote 14 important books about Canada's past. His first books detailed the role of the forest and the timber industry in Canadian development. His best-known work, Colony to Nation (1946), sought a basis for a national community that would unite French and English Canadians.

Lower's combative personality often put him at odds with Queen's administration. One of his most notable battles was against the planned construction of a physics building on lower campus (named after its location, not himself) in the 1960s. His tireless work lobbying alumni and Trustees was an important factor in convincing Queen's officials to place the new physics building, Stirling Hall, on its present site.

He received an honorary degree from Queen's in 1972 and lived and wrote in Kingston until his death in 1988.

His personal and research records are held in Queen's University Archives.