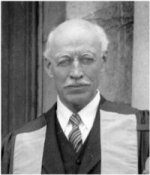 A graduate of Queen's (1889), William Thomas MacClement returned to his alma mater as a member of the Biology Department in 1906.

His most notable achievement was his establishment of a successful summer school.

Queen's had offered summer courses in the 1880s and 1890s but interest was far from overwhelming. Previously, the School of Mining (see Engineering and Applied Science, Faculty of) had operated a summer school, which MacClement himself had once attended, but it hadn't been considered a success. However, MacClement advocated reopening the summer school.

"The original error," he told the Kingston Whig-Standard in 1938, "was in charging only $5 for the summer course: a fee five times as large would suggest to prospective students that the course offered was five times as good." In 1910, Queen's summer school re-opened, with Professor MacClement acting as convener. Summer school was ideal for teachers as it allowed them to work toward their BA during the summer vacation.

In 1915, MacClement was appointed director of the Summer School Committee, a position he retained until his death.