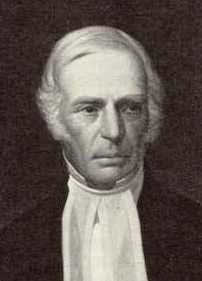 The Rev John Machar was Queen's second Principal and the leader of Kingston's Presbyterian community in the mid-19th century.

Machar emigrated to Canada in 1827 to become minister of St Andrew's Church in Kingston, the city's main Presbyterian Church and the site where Queen's Board of Trustees held their first meetings. He was a member of the university's first Board and was appointed Principal when the Rev Thomas Liddell resigned in 1846.

Throughout his term, he insisted that he was holding the position only temporarily and encouraged the Trustees to find a more permanent candidate for the job. In fact, Machar was technically only a "part-time" Principal, since he did not give up his position at St Andrew's and devoted a great deal of his time to his parish.

Machar did not neglect the university, however. He was a stern moralist and sought to instill in students the ideals of hard work and a strict conscience. His convocation speeches were known for their harsh warnings about the evils of "idleness and folly." He was distrustful of the power that laymen had at Queen's and stressed its role as a training college for ministers. So strong were his beliefs that he initially opposed the election of William Morris as the first Chairman of the Board of Trustees because he thought a minister should hold the position.

At the end of his term, Machar presided over the university's move to Summerhill, the old limestone residence that still stands at the heart of the campus. He resigned in 1853 to devote more time to St Andrew's, but remained active in the Queen's community until his death.

Machar was the father of the poet, novelist, and social reformer Agnes Maule Machar, who wrote a short biography of Queen's first janitor, John Anderson.