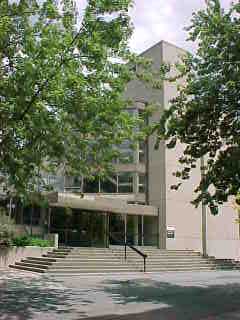 Completed in 1973, Mackintosh-Corry Hall, or as it is more commonly known, "Mac-Corry," was completed in 1973 as a new Arts and Social Science complex. It sits on the former site of George Richardson Memorial Stadium.

Mac-Corry Hall is home to several departments and institutes, as well as a cafeteria, study and seminar rooms.