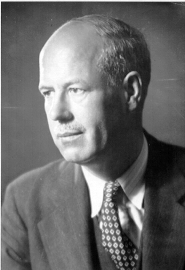 William Archibald Mackintosh, who served as Queen's 12th Principal from 1951 to 1961, was a distinguished economist and public servant who was also Queen's first truly "homegrown" leader. He was the first principal chosen from the ranks of Queen's own faculty (previous principals had all been recruited externally) and he was also the first Queen's graduate to reach the Principal's office.

Mackintosh was born in Madoc, Ontario and was educated at Queen's (MA 1916) and Harvard University (PhD 1922). At Queen's, he was president of his year and the winner of gold medals in history and political and economic science. A specialist in labour issues, he interrupted his studies at Harvard to teach at Brandon College, Manitoba from 1917-1919 before joining Queen's faculty in 1922 as an Assistant Professor of Economics.

When the Second World War began in 1939, Mackintosh was recruited to Ottawa to apply his administrative and economic talents to the war effort. He first served as special assistant to the Deputy Minister of Finance; later, from 1944 to 1946, he served as Director of Research in the Department of Reconstruction; and he served as Acting Deputy Minister of Finance in 1945. In the same year, he was the principal author of the White Paper on Employment and Income, which mapped out Canada's postwar economic strategy. He was also responsible for the negotiation of wartime loans and acted as a mediator when a railroad strike seemed imminent in 1950.

Mackintosh returned to Queen's in 1946, where for five years he simultaneously held the positions of Head of the Department of Political and Economic Sciences, Director of the School of Commerce and Administration, Dean of Arts, Vice Principal of the University, and Professor before succeeding Robert Wallace as Principal in 1951. His term coincided with a period of unprecedented growth for Queen's, as governments in the booming postwar economy poured money into higher education.

The huge boom in residence building was due in large part to Mackintosh's vision of Queen's as a residential university, where the majority of students would come from outside of Kingston and live and study together in a close-knit community.

Mackintosh was known for his dedication to Queen's, and was proud of the spirit of loyalty and community that Queen's inspired. His favourite way of illustrating this was to tell a story from his experiences during the war. Once, while flying to England on government business during the war, his plane stopped in Gander to refuel and was delayed. He and the other passengers were very frustrated by the fact that, due to wartime security, they were not told when they would be departing or any other helpful information. Mackintosh was waiting quietly when an airman sidled up to him and whispered: "You will be departing at 1600 hours, you will be flying at a height of 5,000 feet for one hour, and then at 20,000 feet for four hours, and the weather outlook is most favourable. Cha Gheill!"

He retired as Principal in 1961 so that his friend, James Alexander Corry, who had been asked to become to Principal of the University of Saskatchewan, could be installed as Principal at Queen's instead, ensuring that Queen's would not lose such an able administrator. Mackintosh retained the post of Vice-Chancellor until 1965.

For his dedication to Canada, his contributions as a scholar, and his leadership of Queen's, Mackintosh received many honours: eleven universities, including Queen's, granted him honorary degrees. He was also a Companion of the Order of St Michael and St George and of the Order of Canada.

He was married to Jean Isobel (Easton) Mackintosh (BComm'25) and had one child, Alison (Mackintosh) Morgan, who became a University Secretary.

He is buried in the Cataraqui Cemetery and his personal papers are held in the Queen's Archives.