John Matheson, Arts'40, LLD'84, an influential figure in the development of national symbols such as the Canadian flag and the Order of Canada,died at the age of 96 on Dec 27, 2013.

"John Matheson was a respected war veteran, politician and judge as well as a great ambassador for Queen's," says Principal Daniel Woolf. "Whenever he was on campus, Mr. Matheson generously shared his insights on the country and the university that were informed by his keen mind and acute understanding of history. I would like to express our condolences to the Matheson family on behalf of the entire Queen's community." 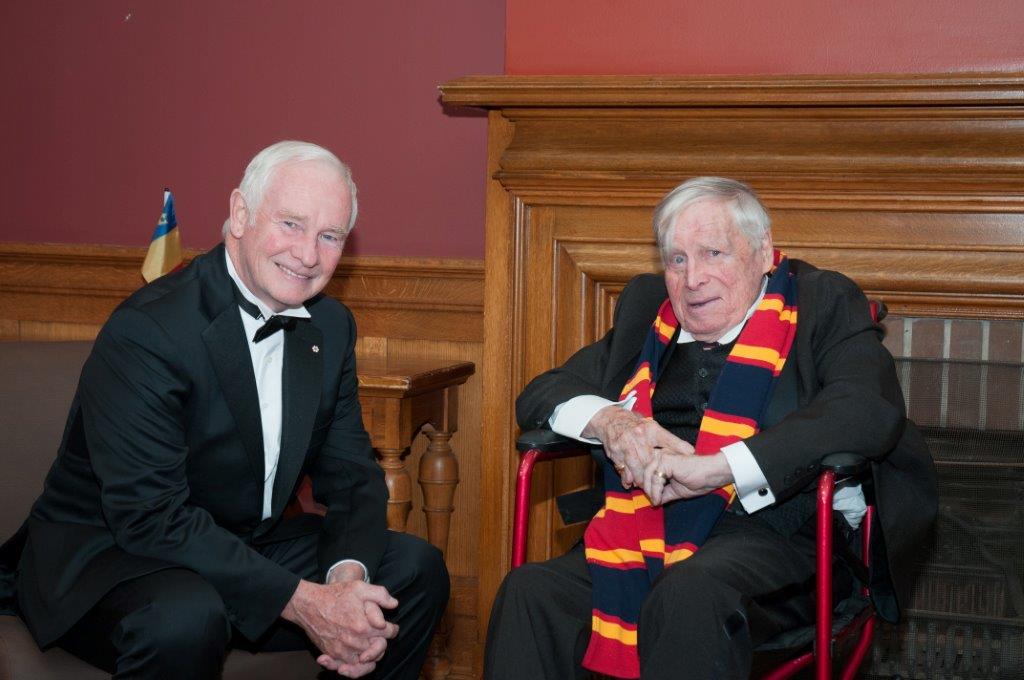 Mr. Matheson graduated from Queen's in 1940. He was president of the Arts Society and involved in many Alma Mater Society activities, which earned him the Tricolour Award and induction into the Tricolour Society. He told reporters that the Tricolour Society served as a model for Canada's highest civilian honour, the Order of Canada, which he helped establish in 1967 as a Member of Parliament.

Mr. Matheson contributed to Queen's in numerous capacities over his lifetime. He was chairman of the Board of Management of Queen's Theological College and a member of University Council. He spent two decades on the Board of Trustees and served on several of its committees during that time. He developed the concept for the Rector's Badge in 2003. Queen's honoured Mr. Matheson with a Distinguished Service Award in 1977. He accepted an honorary degree from Queen's in 1984.

Mr. Matheson attended many Queen's functions and was an ardent booster of the university's football program. He was a recognizable fixture at Richardson Stadium during football games, sporting his Queen's tam and cheering on his beloved Gaels. Following Queen's Vanier Cup victory in 2009, Mr. Matheson dedicated a tree in City Park near campus to the coaches and players of the national championship team.

John Matheson remained active in the Queen's community throughout his lifetime. Mr. Matheson is seen here meeting with Justin Trudeau when he visited campus in February 2013. Mr. Matheson and Mr. Trudeau's father, Pierre Trudeau, were members of the Liberal caucus in the 1960s. (Photo credit Adam Scotti)

After he graduated from Queen's, Mr. Matheson served in the Second World War as a member of the 1st Field Regiment, Royal Canadian Horse Artillery, 1st Infantry Division. He was gravely wounded during the Italian campaign in 1943. He recovered from his injuries and retired from the military with the rank of colonel in 1945.

Mr. Matheson earned a law degree following the Second World War and began practicing in Brockville until he was elected to the House of Commons in 1961 for the riding of Leeds. He was the parliamentary secretary to Prime Minister Lester B. Pearson from 1966-1968. He left politics after losing his seat during the 1968 general election by a mere four votes.

He is best remembered for his contributions to the creation of Canada's flag. He was a member of a multi-party parliamentary committee charged with identifying a new flag design. He collaborated on a sketch that was ultimately approved by Parliament and by Royal Proclamation as the national flag of Canada.

Mr. Matheson became a judge in the judicial district of Ottawa-Carleton in 1968. He retired from the Ontario Court of Justice in 1992.