As published in the Queen's Gazette on Tuesday, October 6, 2015. 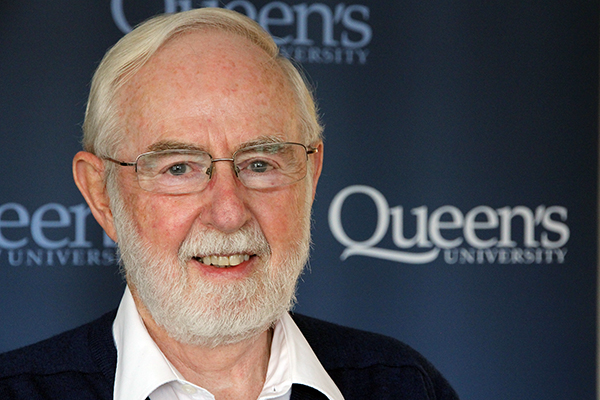 Queen's University professor emeritus Arthur McDonald is the co-winner of the 2015 Nobel Prize in physics.

The announcement, made Tuesday morning [October 6, 2015] by the Royal Swedish Academy of Sciences in Stockholm, said Dr. McDonald won the award, along with Takaaki Kajita of the University of Tokyo, "for their key contributions to the experiments which demonstrated that neutrinos change identities."

Dr. McDonald received the call from the Nobel committee at 5 am adding that he immediately had a feeling of "tremendous accomplishment by our team."

“I am truly honoured to receive the Nobel Prize in physics,” Dr. McDonald says. “While I am a co-winner of the Nobel Prize, the honour really represents a culmination of the hard work and contributions of Canadian and international colleagues with whom I have collaborated with during my career.”

It was a momentous day not only for Dr. McDonald but for Queen's as well.

“I want to offer my heartfelt congratulations to Dr. McDonald on this significant achievement,” says Daniel Woolf, Queen’s Principal and Vice-Chancellor. “Dr. McDonald’s scientific contributions have advanced our understanding of the universe, and also set the path for new directions in the study of physics and astronomy. His innovative vision has made Canada a world-leader in the field of particle astrophysics and paved the way for fruitful international collaborations.”

The findings solved a puzzle that physicists had wrestled with for decades, the academy added in its announcement.

Dr. McDonald’s research took place at the Sudbury Neutrino Observatory (SNO) scientific collaboration, an advanced research facility located 2 km underground in an active nickel mine. The experiment demonstrated that neutrinos from the sun were not disappearing on their way to earth and were captured with a different identity when arriving at SNO.

Meanwhile, Dr. Kajita presented the discovery that neutrinos from the atmosphere switch between two identities on their way to the Super-Kamiokande detector in Japan.

This “metamorphosis” requires that neutrinos have mass.

The discovery changed “our understanding of the innermost workings of matter and can prove crucial to our view of the universe,” the Nobel committee said.

“I am absolutely delighted at this worldwide recognition for the fundamental research undertaken by Dr. McDonald and the team at SNOLAB. There is a tremendous amount of pride and satisfaction as an institution that Queen’s has this moment to celebrate one of its finest in Arthur McDonald. It doesn’t get better than the Nobel Prize,” says Steven Liss, Queen’s Vice-Principal (Research). “Queen’s has a history of attracting the best scholars and students, and we provide an environment that inspires the best. Many students and faculty who have come to study and research at Queen’s have certainly benefited from Dr. McDonald’s leadership and mentorship.”

Dr. McDonald arrived at Queen’s in 1989, was the inaugural Gordon and Patricia Gray Chair in Particle Astrophysics and served as the director of SNO, now known as SNOLAB.

The facility is operated by the SNOLAB Institute whose member institutions are Queen’s University, Carleton University, Laurentian University, University of Alberta and Université de Montréal. It is located 2 km below the surface in the Vale Creighton Mine near Sudbury, Ont.

Dr. McDonald has been a professor emeritus since 2013. He earned his PhD in 1969 from the California Institute of Technology.

For his research, Dr. McDonald has received a number of awards and recognition including being elected a Fellow of the Royal Society of the UK and Commonwealth in 2009. In 2010 he received the Killam Prize in the Natural Sciences, in 2011 received the Henry Marshall Tory Medal from the Royal Society of Canada, its highest award for scientific achievement; and in 2013 he was awarded the European Physics Society HEP Division Giuseppe and Vanna Cocconi Prize for Particle Astrophysics.