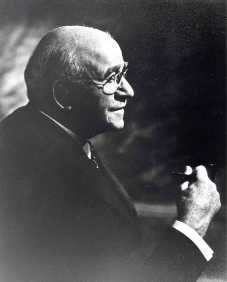 McLaughlin was the founder of General Motors of Canada and one of Queen's most generous benefactors. He was born in Enniskillen, Ontario and as a young man entered his father's carriage manufacturing business as an upholsterer and later as a carriage designer. In 1892, he and his brother, George, entered into partnership with their father in the McLaughlin Carriage Works in Oshawa.

McLaughlin took his first car ride in 1904 and was fascinated by these new "horseless carriages." The family carriage business became the McLaughlin Motor Car Company in 1907, and was soon selling the first cars assembled in Canada. In 1910, Mr. McLaughlin became a member of the Board of Directors of General Motors. The business was purchased by General Motors in 1918 and incorporated as General Motors of Canada, with McLaughlin as president. He remained in the post until 1942, after which he served as chairman of the board (1942-1967).

McLaughlin was a friend of Principal Robert Wallace and Chancellor Dunning. He became one of Queen's most generous benefactors, donating about $4.5 million to the university. He donated the funds for McLaughlin Hall (which is named in his honour), gave a substantial contribution of $350,000 to rebuild the Students' Memorial Union (now the John Deutsch University Centre) in 1947, and provided numerous smaller gifts, including the personal library and papers of Governor General John Buchan. In 1951, he set up the McLaughlin Trust for the purpose of promoting research, scholarly work, and graduate studies at Queen's. He also funded the McLaughlin Research Chairs and the R. Samuel McLaughlin Fellowships.

His wife, Adelaide, was also a generous benefactor of Queen's. She donated the funds for the construction of Adelaide Hall, which is named in her honour.