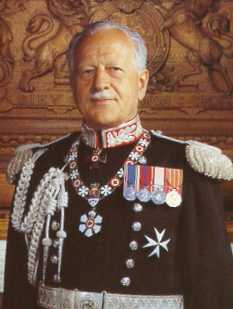 He was born in Lacombe, Alberta on April 19, 1900 and educated at the University of Alberta (BA 1920) and Oxford University, which he attended on a Rhodes Scholarship.

While at Oxford, Michener met Lester B. Pearson, with whom he developed a lifelong friendship. He returned to Canada after graduate school and began practicing law in Toronto in 1924, founding the prominent law firm Lang Michener.

He was a civilized and witty speaker but clashed frequently with his Conservative colleague, Prime Minister John Diefenbaker. Diefenbaker's Liberal successor, Lester B. Pearson, appointed Michener high commissioner to India in 1964, where he served until Pearson appointed him Governor General in 1967. He was also the first Canadian ambassador to Nepal.

He and his wife, Norah, made the office less formal by gestures such as discontinuing the use of the curtsey. Among his innovations were frequent state visits abroad, periodic meetings with Provincial Lieutenant-Governors, and the establishment of an Honours Secretariat (the Order of Canada having been instituted in 1967) at Rideau Hall. Throughout his life he was an extremely healthy and active man, and while in office he encouraged Canadians to lead a healthier lifestyle though the "Participaction" program.

He was selected Queen's Chancellor when his term as Governor General ended in 1974. He was a good friend of the University and visited Queen's regularly, even after his retirement in 1980, to attend lectures of the Michener Visitorship, which was established in his honour to bring distinguished French Canadians to Queen's for lectures and discussions.

Michener was the second Canadian in history to be awarded the Royal Victorian Chain, and has had schools and awards named in his honour. Most notably, on August 26, 1979, Alberta Premier Peter Lougheed - who would later become Chancellor of Queen's - named a mountain in the upper valley of the North Saskatchewan River "Mount Michener."

The Queen's Pub in the John Deutsch University Centre is dedicated in his honour.