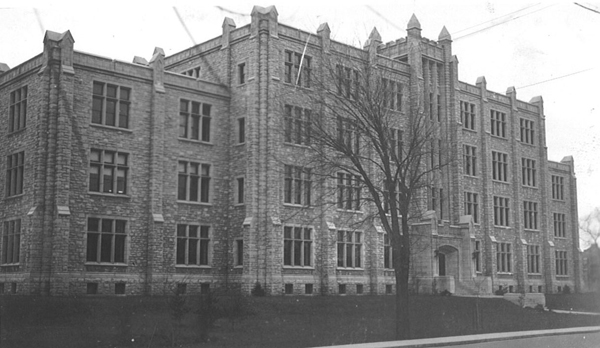 Built in 1931 and substantially enlarged in 1973, Miller Hall is named after Willet Green Miller, a professor of Geology and Petrology at Queen's and Ontario's chief Geologist (1902-1925), and is home to the Department of Geological Sciences and Geological Engineering.

It is located on Union Street opposite the foot of Division Street.

The building, constructed in the Collegiate Gothic style, also contains the Miller Museum of Geology. The Bruce Wing, built in 1973, is attached to the southwest corner of Miller Hall. It is named after Everend Lester Bruce, a Professor of Geology at Queen's (1914-1949) and head of the department (1944-1949).

The land currently occupied by the Bruce Wing was the location of Queen's first skating rink, which burned down in the 1920s (see Fires). The parking lot behind Miller Hall and part of the land occupied by Humphrey Hall held the Jock Harty Arena from 1922 to 1958.