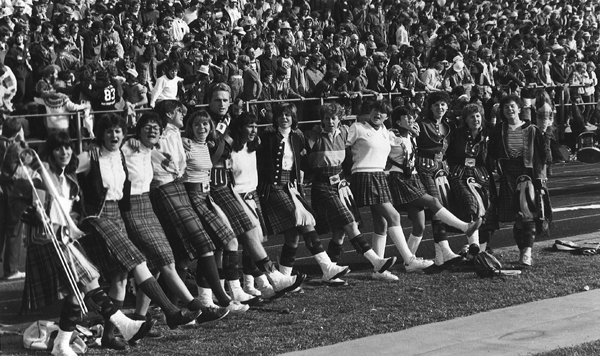 Queen's Bands doing the Oil Thigh at an athletics event

This combined song and dance is a distinctive Queen's tradition, performed at sporting events and most university occasions less formal than convocations (although spontaneous Oil Thighs have also been known to occur). It consists of the old song "Queen's College Colours," sung to the accompaniment of a low-kicking sort of can-can dance.

The name "Oil Thigh" comes from the chorus of the song, which begins with the Gaelic words "Oil thigh na Banrighinn a'Banrighinn gu brath" ("The university of the wife of the King forever"). At football games, it is a tradition that students perform an Oil Thigh after every touchdown.

The song "Queen's College Colours" was written in 1898 by student Alfred Lavell to inspire Queen's football team to victory after a disappointing loss to the University of Toronto. Its staying power is somewhat surprising: it was just one of countless university songs penned at a time when songwriting was a booming pastime among students, and even Lavell later described its verses as "sophomoric."

Its survival is due partly to its rousing Gaelic chorus, which was actually written separately as a university cheer in 1891, and its popular tune, stolen from the American "Battle Hymn of the Republic." But it has also prospered because most of its rivals suffered even more noticeably from over-sentimentality and clumsy rhyme.

The modern version of the Oil Thigh:

Queen's College colours we are wearing once again,
Soiled as they are by the battle and the rain,
Yet another victory to wipe away the stain!
So, Gaels, go in and win!

Varsity's not invincible, they tremble at the news
Of Queen's College Colours and are shaking in their shoes.
Yet another victory, the chance we dare not lose.
So, Gaels, go in and win!

McGill has met defeat before, they've heard the same old tale
Of Queen's College colours, boys, the ones that seldom fail,
Remember Captain Curtis and the conquerors of Yale,
So, Gaels, go in and win!

Western's White and Purple have come down to Queen's to score,
We sent them back to London as they'd ne'er been sent before.
And Queen's again were victors as they were in days of yore,
So, Gaels, go in and win!

There may be other colours to the breezes oft unfurled,
And many another college yell by student voices hurled;
Queen's College colours are the dearest in the world,
So, Gaels, go in and win!