Organized welcoming activities for new students began at Queen's in the late 19th century. Most early events, such as the candle-lighting ceremony for women, were formal and sedate. Early this century, however, as Victorian constraints began to disappear, more boisterous activities emerged.

Prior to the First World War, there were "rushes," in which outnumbered first-year students and upper-year students clashed in a free-for-all fight, inevitably ending with the younger students bound hand and foot with ropes.

Following the war, during which such activities were suspended, individual faculty societies revived the rushes as "freshman initiations." Most initiation rites involved innocent stunts and rules, such as taking the measurements of fields with sausages, paddling imaginary canoes, and requiring first-year students to wear mismatched socks.

But there were rowdier activities as well, including tomato and egg fights between Arts and Engineering students, ceremonies in which first-year students were covered in molasses and feathers, and various battles with visiting football fans.

Following the Second World War, student leaders and university administrators made repeated efforts to reduce hazing and shift the focus of the welcoming activities to academic counselling and orientation. But it was not until the 1970s that "Orientation Week" was established at Queen's as a series of activities to acquaint first-year and transfer students with the opportunities available to them at the university.

At the same time, the Senate passed a resolution forbidding "the use of physical force on any person as part of initiation activities at Queen's University." Problems, however, persisted, including overly rambunctious behaviour and rituals. 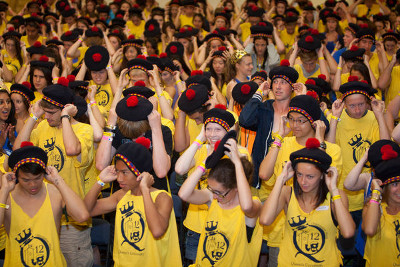 Since the mid-1980s, university and student leaders have made enormous progress in toning down Orientation Week, and recent weeks have generally succeeded in introducing students to Queen's according to goals set out by the Senate in 1988.

These are to emphasize the community of Queen's and its intellectual, cultural, and social resources; to offer events that provide for students' diverse needs and interests; to foster an awareness of the Kingston community and encourage responsible citizenship; and to generate enthusiasm and a sense of pride in becoming a member of the Queen's family.

Orientation Week events are planned and scheduled by individual faculty offices, residences, and by upper-year students in the Alma Mater Society and various faculty societies, but since 1991 they have been reviewed each year by a standing committee of the Senate, the Orientation Activities Review Board.