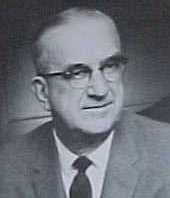 John Harland Orr had a lifetime association with Queen's, graduating in 1923 and taking up a faculty position almost immediately afterward. He was a Professor of Biochemistry and Bacteriology and was eventually made head of the department. He taught until 1963 and continued on with his many other affiliations until his death in 1965.

Towards the end of his life, Professor Orr lived in the house at 32 Queen's Crescent that had once belonged to Vice-Principal McNeill and is now the Ban Righ Centre.

In addition to his academic involvements, Professor Orr was the Head of the Men's Residence Board. The student apartment building named in his honour on west campus, John Orr Tower, is a fitting tribute to his work on this board. When the Student's Memorial Union (now the John Deutsch University Centre) burned down in 1947 (see Fires), he led the campaign to have a new one built as soon as possible.

Professor Orr also served as President of the Alumni Association and in 1966, the Toronto Branch of the Association renamed their highest award for exceptional alumni achievement in his honour. In addition to his many years of service, Professor Orr was also a benefactor of Queen's and left $280,000 to the University when he died.