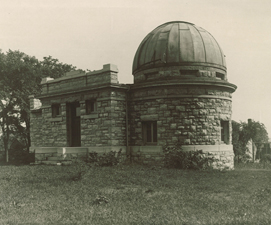 The roots of Queen's Observatory lie in the founding of the Kingston Observatory in 1855 by a group of local "Gentlemen Amateurs" interested in astronomy. This observatory, located in City Park, was the first in Ontario. The city initially provided the operating funds but some councillors objected to paying for such a specialized facility "which no one knows anything about except a professor and one or two students at Queen's College."

In 1861, therefore, the city happily sold the observatory and an acre of the park to Queen's for $1. There were several conditions, however, including that the observatory arrange weekly corrections to City Hall's clock and allow the mayor and all councillors and their successors to use the telescope at no charge.

Due in part to repeated acts of vandalism, the Observatory moved in 1881 to a location just west of where Carruthers Hall now stands. It was taken down in 1901 and rebuilt in 1909 in a small domed building at the foot of University Avenue. This was destroyed to make way for McLaughlin Hall in 1946. 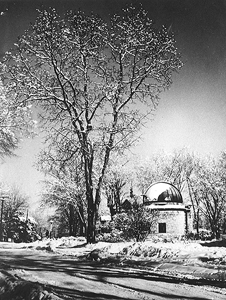 The Observatory has been located on the roof of Ellis Hall since that building was constructed in 1958. Its green metal dome, a conspicuous campus landmark, housed a 15-inch reflecting telescope built in 1958, which was replaced in 1999 by a state of the art 16-inch telescope.

Although modest in size by modern standards and somewhat limited in its performance by the brightness of Kingston's city lights, the telescope is still heavily used, partly as a teaching and demonstration tool for undergraduate and graduate astrophysics degree programs, and partly in hosting public groups of varied kinds.

Learn more about the Queen's Observatory...