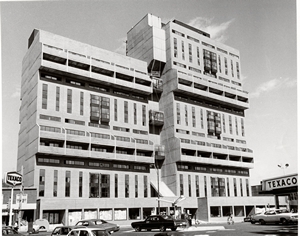 Newcomers to Kingston know this building at the corner of Princess and Division Streets only as a mammoth apartment block, but the huge and bulky structure was originally built in 1972 as Elrond College, an experimental cooperative student residence owned by the University.

The idea for Elrond College came from students who, in the late 1960s, were fed up with traditional residences, restrictive landlords, and the perennial shortage of housing in Kingston. The co-op, named after a character in the Lord of the Rings whose house was "a cure for weariness, fear, and sadness," was to be a coeducational residence "where the 'they' is 'you' and the rules are your own," as early promotional material promised.

The students secured support from the Alma Mater Society, Queen's administration, and the federal government, and had high hopes for a new era of student housing when the co-op opened in 1972. But the 16-storey project was plagued by financial problems, including a lawsuit leveled by its construction company and a chronic inability to fill its 400 beds.

It worked fairly well as a co-op at first, with all residents doing a couple of hours of cleaning and cooking work each week. But the system began to break down in the mid-1970s and the building became increasingly shabby.

After a long and winding road of financial misery, the idealistic project closed its doors for good in 1981. The building was sold and it has been a privately-owned apartment block ever since.