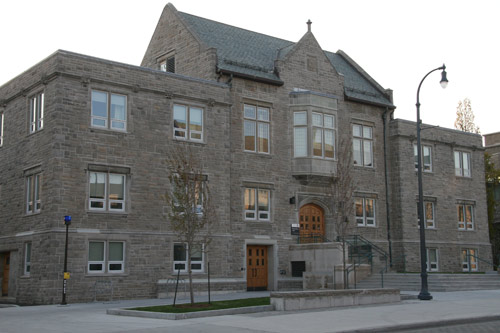 Richardson Hall was completed in 1954 specifically as an administration building. It was considered necessary because the administrative offices had long been located in Douglas Library and were causing a great deal of congestion in that already busy building.

It is named after James Armstrong Richardson, a graduate of Queen's, a prominent Canadian businessman, and Chancellor of the university from 1929-1939.

When the building opened, it caused quite the scandal because of its perceived excessive luxury. W.E. McNeill, the retired Vice Principal and Treasurer, wrote that "the splendour of the administration building, especially its furnishings, is the topic of gossip. Two rooms have broadloom carpets from wall to wall; all offices have rugs and drapes." Even Principal Mackintosh was said to be uncomfortable in such opulence.

In addition to its main function, Richardson Hall served at one time as the home of the Queen's Post Office, the Maintenance Department, and the offices of the Faculties of Arts and Science and Applied Science.

The building was renovated in 2008.

It now houses the Principal's Office, the offices of several Vice-Principals, and the University Secretariat.