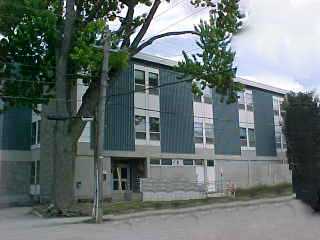 This building was constructed in 1971 as temporary office space, but has remained in use for far longer than intended. It is the home of various administrative departments and is named after the Rideau Canal.

It is one of three buildings at Queen's to be named after a local waterway - the other two are the Cataraqui Building and the St. Lawrence Building (which was torn down to make room for Chernoff Hall).