"Queen's College at Kingston" was incorporated by an Imperial Royal Charter issued by Queen Victoria on October 16, 1841, a date celebrated ever since as University Day. 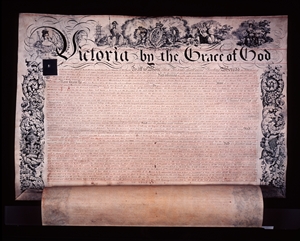 Contrary to persistent myth, the Queen herself did not sign the charter; it was actually signed by Leonard Edmunds, a minor British government functionary who later gained fame in a major British political scandal.

The Charter established Queen's basic structure. Among other things, it created a Board of Trustees responsible for overseeing the operation of the University, provided for a Senate responsible for all academic matters, and created the post of Principal.

The charter remains the university's basic constitutional document, but it has been modified in numerous important respects by Parliament, which has authority over all amendments and additions.

In 1882, for example, it was changed to allow the creation of the University Council and the position of Chancellor. These had in fact existed at Queen's since 1874, when the University had commissioned the provincial legislature to amend the Charter to provide for them. In 1882, however, a court judgment in a case involving another institution revealed that the province had no such authority, so a federal statute repealing the desired amendments was quickly secured by Queen's.

The most important set of amendments came in 1912, 1913, 1914, and 1916, when the Charter was substantially changed so that Queen's could separate from the Presbyterian Church. At this time, the University also changed its name officially to "Queen's University at Kingston." In 1961, a private member's bill divided the offices of Principal and Vice-Chancellor.

The most recent amendment was in 1996 when the composition of the Board of Trustees was expanded to include students, faculty, and staff.

The charter itself consists of three sheets of parchment with handwritten script and decorative borders, all attached at the bottom by red cord to a large seal of green wax imprinted with pictures of Queen Victoria.

The document, somewhat faded but still legible, is held in the Queen's Archives. A fine replica of the Charter was donated to Queen's by students for the University's Sesquicentennial anniversary and is on permanent display in the John Deutsch University Centre.