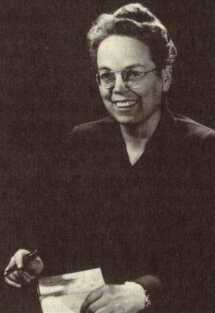 Jean Royce, BA'29, LLD'68, was the longest-serving Registrar in Queen's history, a profound influence on the lives of thousands of Queen's students, and a force in the academic development of the university.

Royce was born in St Thomas, Ontario and studied at the Ontario Library School before enrolling at Queen's in 1927 to study English and History. She worked briefly at Douglas Library, where she organized the documents collection, and as a teacher in Whitby before becoming Queen's Registrar in 1933. She served in the post for the next 36 years, during which time it is estimated that she personally counselled 30,000 students.

She was renowned for her sympathy and understanding of students' problems and her skill at identifying and encouraging students of ability. She also had a significant influence on the development of Queen's curriculum, especially in the expansion of course offerings in the Faculty of Arts and Science in the 1950s and 1960s.

For most of her tenure as Registrar she also served as Secretary of the Senate, and at various times she also held other positions, including Secretary of the Arts and Science Faculty Board and Secretary to the Board of Graduate Studies.

She was also National President of the Alumnae Association, helped determine the scholarship winners for this association for many years, was a founder of the Ban Righ Foundation (see Ban Righ Centre), and a member of the Board of Trustees (1969-1975).

In addition, the students showed their appreciation of her wise counsel by making her honorary President of the Alma Mater Society in 1952.

In 1965, Royce was awarded the Montreal Medal of the Montreal Alumni Association for her exceptional contributions to the University. Royce also received an honorary doctorate of laws in 1968 and Jean Royce Hall on west campus is named in her honour.

Professor Emerita Roberta Hamilton published her biography, Setting the Agenda: Jean Royce and the Shaping of Queen's University, in 2002.