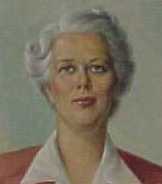 Ryan was one of Ottawa's most successful businesswomen and one of Queen's most generous benefactors.

She was born Kathleen Whitton in Renfrew, Ontario and graduated from Queen's with an honours degree in Economics in 1926. She married fellow Queen's graduate Frank Ryan (BA'27), who became a prominent radio broadcaster after working at Queen's radio station CFRC. He was also the owner and founder of CFRA radio station in Ottawa.

She took over his business interests after his death in 1964 and rapidly developed a reputation as one of the city's most astute business leaders. In 1976, she established the Kathleen Ryan Foundation at Queen's to provide for the preservation of buildings in the Medical Quadrangle.

The fund helped to renovate the New Medical Building into a home for the Queen's University Archives, which was renamed Kathleen Ryan Hall in her honour in 1982. She also gave a significant grant to CFRC Radio in 1977 to help it establish a stereo signal.

Kathleen Ryan served as a University Councillor for many years. Her sister, Charlotte Whitton, was also a Queen's alumna and became Canada's first female mayor when elected in Ottawa in 1950.