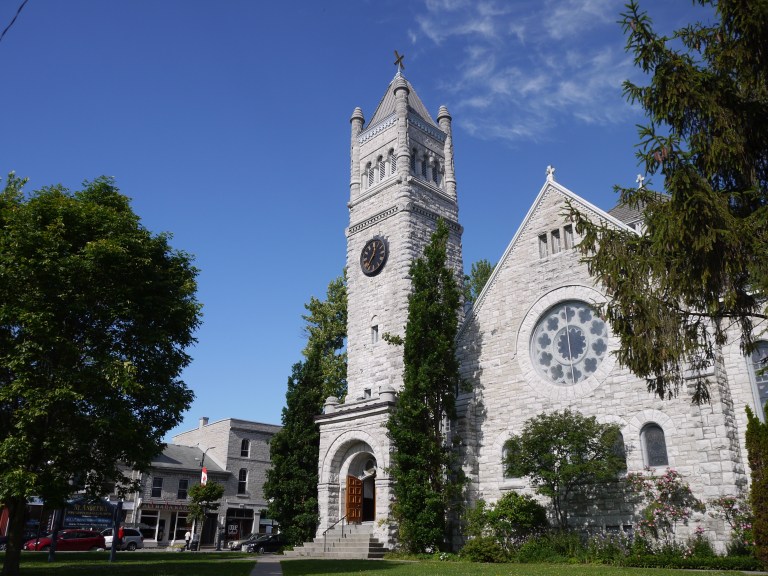 This church at the corner of Princess and Clergy Streets played an important role in Queen's early history. It was the main Presbyterian Church in Kingston in the 19th century and was thus a natural gathering place for the university's founders.

When Presbyterian leaders in Upper Canada decided to found the university in 1839, that important meeting took place at St Andrew's. The first meeting of Queen's Board of Trustees also took place at the church in 1840.

The university's Royal Charter of 1841 recognized St Andrew's importance by stipulating that Queen's must be located no further than three miles from the church. There was an intimate relationship between Queen's faculty and St Andrew's leaders for decades, most obvious between 1846 and 1853 when the Rev John Machar was both principal of Queen's and head of the church.

A royal charter followed in 1841. Amongst many things, the charter stipulated that the fledgling college be situated no further than three miles from St. Andrew’s.

When Upper Canada was created in 1791, it was intended to be “an exact image and transcript” of Britain. That meant a monarchy and an established church – Anglicanism, a faith that would be the spiritual mold of the budding society. The Anglican Church was thus endowed with land reserves, privileged access to the colonial administration and, in 1829, its own place of higher education: King’s College in Toronto. Presbyterians voiced their discontent. Celtic immigration had increased the numbers of non-Anglicans and fanned demands for religious equality. Presbyterians wanted equal access to education and equality before the state.

York (Toronto before 1834) was the bastion of Anglicanism. To its east, the Kingston district, (population 11,500 in 1840), developed a Presbyterian sensibility. In 1817, Presbyterians there were weary of relying on itinerant preachers and began to agitate for a “meeting house.” Five years later, the doors of St. Andrew’s Church opened at the corner of Princess and Clergy streets. Scotland supplied its first two dynamic ministers: John Barclay and John Machar. A manse, a library and a children’s school followed.

Presbyterians continued to resent the Anglican monopoly over higher education. Where were their ministers to train? Where were the Presbyterian liturgy and scriptures to be studied? In Scotland, Presbyterianism had enjoyed equality with Anglicanism since the 1707 Act of Union. Not so in Canada.

When King’s College rejected the idea of a Presbyterian professorship, agitation led by Rev. Machar and William Morris of Perth shifted to establishing a Presbyterian college in Kingston. A meeting in St. Andrew’s church hall on Dec. 18, 1839 crystalized the agitation. A resolution seconded by John A. Macdonald laid out the college’s threefold purpose: to invite support from the Presbyterian Church in return for educating its ministers; to “give our youth the fullest access to the cultivation of all branches of a literary and scientific education” and to enhance Kingston’s future by making it a university town. Fundraising began that evening with a goal of £30,000.

Much negotiation lay ahead. In 1840, the Assembly in Toronto passed facilitating legislation. Delegations were dispatched to London. Pressure for annual financial support was exerted on the Presbyterian Synod. A royal charter followed in 1841. Amongst many things, the charter stipulated that the fledgling college be situated no further than three miles from St. Andrew’s.

The tie between St. Andrew’s and Queen’s College continued. Rev. Machar sat on the college’s Board of Trustees, taught its students Hebrew and acted as its principal from 1846 to 1853. Other Presbyterian ministers followed as Queen’s principal.

In the 1870s, the Presbyterian Church slackened its financial support of Queen’s and in 1912, the college secularized itself in order to secure financial aid from the province. Many would, however, argue that Presbyterianism’s urge to public service, nation-building and egalitarianism echoes through Queen’s culture to this day. In 1991, a heritage service held at St. Andrew’s in Queen’s 150th anniversary year honoured the university’s debt to the church’s founding stimulus.