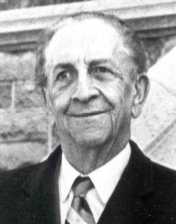 Stauffer was a Queen's alumnus and generous benefactor. Born in Galt, Ontario, he enrolled in Applied Science at Queen's in 1914, majoring in Metallurgy.

Stauffer served as a pilot in the First World War before returning to Queen's to complete his degree (BSc'20). After graduation, Stauffer worked as an engineer for several years before enrolling in graduate studies at the Imperial College of Science in London, England. Back in Canada, he noted the growth of the telephone industry, bought a number of small telephone exchanges, amalgamated them, and sold them to Bell for a profit.

Stauffer invested heavily in mining and, during his long business career, was also involved in ventures in such areas as fuel technology, textiles, and finances. He lived at various times in Toronto, Mexico City, Pennsylvania, and London, England.

Stauffer was one of Queen's most generous benefactors. For years he anonymously provided pensions to widows of Queen's professors. He also felt that Canada had treated Indigenous populations poorly and gave substantial sums to several universities with Native Studies programs.

Other gifts from Stauffer and his estate (administered by his wife, Annabelle, until her death in 1983 and by his friend W. Dennis Jordan, BA '38) have included $1 million for a chair in cancer research, $1.2 million for the construction of School of Policy Studies, $250,000 for the Clinical Mechanics Group, $2.3 million for Walter Light Hall, an organ for Jock Harty Arena, and $10 million for the Joseph S. Stauffer Library, named in his honour.

The W.D. Jordan Special Collections and Music Library was named after Stauffer's friend when the Stauffer Foundation contributed fund renovations in the Douglas Library.