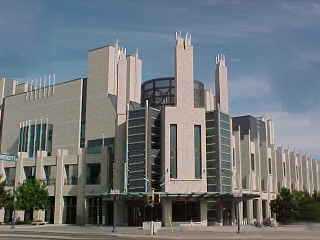 Opened in the fall of 1994, the five-storey Joseph S. Stauffer Library is the largest library on campus, with room for approximately 1.5 million volumes, six kilometres of bookstacks, and study and research space for more than 1,200 students.

It is located on the northwest corner of University Avenue and Union Street.

Stauffer Library is designed in neo-gothic style to match the style of Douglas Library and is clad in limestone. The $48-million facility was a Queen's Challenge Campaign initiative funded by the Ontario government and the private sector. The names of all the donors are recorded as part of a display in the main lobby of Stauffer Library.

In 1997, Stauffer Library was awarded the Governor General's Award for Architecture. The library was designed by Kuwabara Payne Mckenna Blumberg.