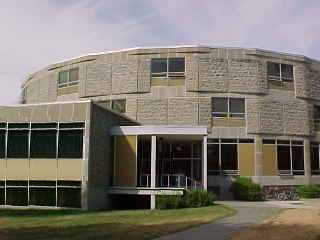 Built between 1962 and 1964, this distinctive round building located on Bader Lane was originally meant to be situated on the lower campus between Kingston General Hospital and Theological Hall. Well publicized protests from students, faculty, and alumni upset with the rapid pace of campus development, however, led to the preservation of that area as a green space.

Students in particular were furious at the thought of losing the last large area of green space on the main campus. The Levana Society circulated petitions and protestors held a mock funeral for the lower campus, singing the "Oil Thigh" as a dirge and listening to a funeral oration given by a theology student. The Faculty Association, led by professor of history Arthur Lower, was also opposed to the idea and appealed to the administration for both practical and sentimental reasons to change their minds. The alumni were divided on the subject, with letters and phone calls pouring in, both to encourage the project and also to hail it as a disaster. The Queen's Journal were vehemently opposed to the proposition, publishing a much circulated editorial entitled "The Rape of the Lower Campus."

The dissatisfaction of so many members of the Queen's community did much to change the mind of Principal Mackintosh and the Trustees. In response to the protests, the university obtained options to buy five properties between Stuart Street and Queen's Crescent instead.

A notable feature of the building is a Foucault Pendulum, which hangs in the centre of the second floor. The pendulum swings in a pattern and at a speed determined by the rotation of the earth and the latitude of Kingston.

The building is named after John Bertram Stirling, a Queen's graduate, an engineer, and businessman of international repute, and eighth Chancellor of Queen's (1960-1974).