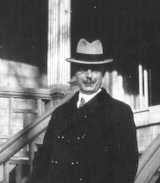 Taylor served as a minister in various parishes in Scotland and England from 1896 until 1911, when he came to Canada to take charge of St Paul's Church in Montreal, where he quickly gained a reputation as one of the country's foremost preachers and public speakers. St Paul's was the same church that Rev William Snodgrass had been minister of before he became Principal of Queen's.

Taylor had been granted an honorary degree from Queen's a year before his appointment. It was largely on the strength of this reputation that he was appointed Principal of Queen's in 1917. After Queen's separated from the Presbyterian Church in 1912, it was no longer required that Principals be ministers, but Taylor's background was comforting for a university that had never had any other type of leader.

When he arrived at Queen's, the Trustees informed him that he needed to somehow raise half a million dollars right away. Chancellor Douglas had promised, before he died, to give $500,000 to Queen's on the condition that they raised an equal amount from other sources within the year. Taylor and the Registrar, G.Y. Chown, began a trek across Canada to appeal to alumni for funds. However, a fundraising campaign during an event as significant as WWI was inevitably overshadowed. When they returned to Kingston, they had collected only half of the required $500,000. In desperation, Taylor made a trip to New York City to talk to the heads of the Carnegie Corporation, even though they had earlier declined to give the $100,000 Taylor had requested of them. This time, Taylor managed to secure $250,000 from them. Taylor would later conduct another successful fundraising campaign, in 1926, and also managed to convince the Ontario government to more than triple its annual grant to Queen's, as well as to give special capital funds for building projects.

On top of being an effective fundraiser, Taylor also had good relations with faculty and students for most of his term. But he did not enjoy the administrative aspects of the job and left that work to others wherever possible.

The main achievements of his term were the building of Douglas Library in 1924, the founding of the Alumni Association, and the expansion of professional and scientific education at the university, including the first commerce courses in Canada. George Richardson Memorial Stadium, Jock Harty Arena, the Students' Memorial Union (see John Deutsch University Centre), and Ban Righ Hall were all also built in the 1920s.

Taylor's great difficulty while at Queen's was dealing with student government. He made criticisms of the Alma Mater Society's court system which, though valid, were presented with an attitude that was disagreeable to the students, who came into conflict with him a number of times.

His term ended on a low note after students went on a brief strike in March 1928 to protest the suspension of three students who had organized an unsanctioned dance in downtown Kingston. The students were adamant that the University had no business regulating their behavior off campus. Queen's Trustees were displeased with how Taylor handled the situation and when he learned of this, he chose to resign.

After his retirement, Taylor was minister for a time at the Church of Scotland in Rome. He later bought a house in Cannes, France, where he lived a quiet life and published a four volume work entitled Ancient Hebrew Literature. Taylor and his wife left France in 1940 and stayed in British Colombia until after WWII. They then returned to France, where Taylor died in 1955.

He is buried in the Cataraqui Cemetery and his papers are held in the Queen's Archives.