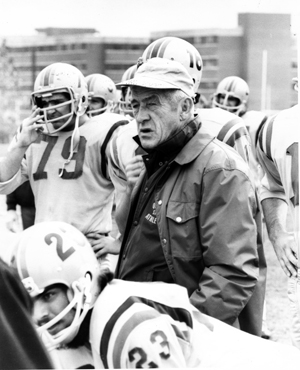 One of the legendary figures in Queen's athletics and a member of the Canadian Football Hall of Fame, Frank Tindall coached football and basketball at Queen's from 1947 until 1975.

Tindall was born in the United States and was educated at Syracuse University, where he was selected as an All-America football star. He first came to Queen's in 1939 and coached the football team for a single season before the outbreak of the Second World War. He returned to the team when the war was over and quickly made his name as a master strategist and motivator.

Under his leadership, Queen's football teams won a total of eight intercollegiate titles and one national title. The Frank Tindall trophy is given annually to the top intercollegiate football coach in Canada.

Tindall Field on Queen's main campus is named in his honour.