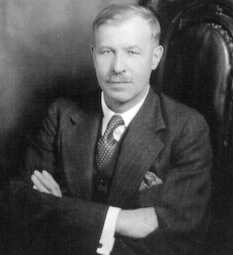 Wallace was Queen's 11th Principal (1936-1951), and led the university through one of its most difficult periods this century. He was also the first Principal this century who came close to forging a national profile as an educational leader comparable to that of Queen's great Victorian Principal, George Grant.

He took a position as Commissioner for Northern Manitoba from 1918-1921 and to familiarize himself with the country, travelled to his post (500 km north of Winnipeg) by canoe in the summer and dogsled in the winter. He was also Commissioner of Mines and Natural Resources for Manitoba from 1926-1928. Wallace was chosen as President of the University of Alberta in 1928. He led the U of A through the Depression, while also founding a School of Nursing there and what is now the Banff School of Fine Arts.

When Sir William Hamilton Fyfe resigned from the Queen's Principalship in 1936, Chancellor Richardson advocated for Wallace to be his replacement. Wallace became Principal in 1936, making him the only scientist to lead the university before the arrival of Principal William Leggett, a biologist, in 1994.

His term coincided with the last years of the Depression and then the Second World War. He was a natural and respected leader and managed to guide the university on a course of steady progress, despite the times.

He also expanded the facilities on campus, presiding over the erection of Clark Hall, McLaughlin Hall, the Craine Building, and the rebuilding of the Students' Memorial Union after it burned down in 1947 (see John Deutsch University Centre and Fires). Wallace also made a special effort to recruit and retain the best faculty; faculty and staff received raises 4 times under his leadership.

He was a national figure in education and was widely regarded by the public and the press as the voice of Canadian universities. He received honorary degrees from 20 universities and was one of three people selected to represent Canada at the conference in England that established the United Nations Educational, Scientific, and Educational Organization (UNESCO).

With the onset of the Cold War, he upheld the principle of academic freedom at Queen's in the face of many who clamoured for the dismissal of left-wing professors.

He retired from Queen's in 1951 at the age of 70. He was married to Elizabeth (Smith) Wallace and had three daughters and a son. One daughter, Dr. Elspeth (Wallace) Baugh, later became Queen's Dean of Women.

Wallace Hall, located in the John Deutsch University Centre, is named in Principal Wallace's honour. That dedication was the one condition on which Col. R.S. McLaughlin, a great benefactor of Queen's and an admirer of Wallace's, agreed to fund the rebuilding of the Students' Memorial Union.

He is buried in the Cataraqui Cemetery and his papers are held in the Queen's Archives.