The First and Second World Wars changed Queen's dramatically. Not only did thousands of students, alumni, staff, and faculty fight abroad - and more than 300 died in action -, but the face of life on campus itself was also transformed.

The First World War had the largest impact. When war began in 1914, there was a great outburst of patriotism in Canada and Queen's students enlisted in large numbers. Mass enlistment also meant a sharp decline in enrolment and income at Queen's and for some time, the university actually hovered on the edge of bankruptcy.

The university itself formed several of its own military units. Of these, the 46th Battery of Field Artillery, which served in France, and the No 5 (Queen's) Stationary Hospital, which served in Egypt and France, were comprised almost exclusively of Queen's students and faculty. French professor Peter Campbell also formed a special Queen's Highland Battalion, the 257th, but most people in the unit were not connected with the university.

Queen's people fought in many of the war's most famous battles, including Ypres, the Somme, and Vimy, and many wrote letters to the Queen's Journal describing their harrowing experiences. All told, 187 students and alumni were killed in action.

Back on campus, all male students were required to take part in military training and Grant Hall and Kingston Hall were transformed into a military hospital.

Most women were involved in Red Cross work and the absence of so many men from campus had the effect of increasing their role at Queen's. Female academic staff were hired, for example, and women students were elected for the first time to the Alma Mater Society executive and to the Queen's Journal (see Charlotte Whitton).

The Second World War had a smaller impact on the university. The war thrust Queen's back into a similar world of military discipline and reduced expectations.

But the pace of enlistment was not so brisk, partly because the previous war had done away with many romantic notions of battle; as a result, Queen's did not face a major financial crisis. Students and alumni once again fought in the major battles of the western front, and often with distinction.

The campus was galvanized when, at Dieppe, the Rev John Weir Foote (Arts '33) won the Victoria Cross, the Commonwealth's top award for bravery. By war's end, 164 students and alumni had been killed in action.

On campus, two of the war's main effects were to increase the amount of scientific research at the university and to boost medical education. The School of Nursing was founded in 1941, partly because of wartime needs.

The Memorial Room in the John Deutsch University Centre commemorates all students and alumni who died in the two wars. 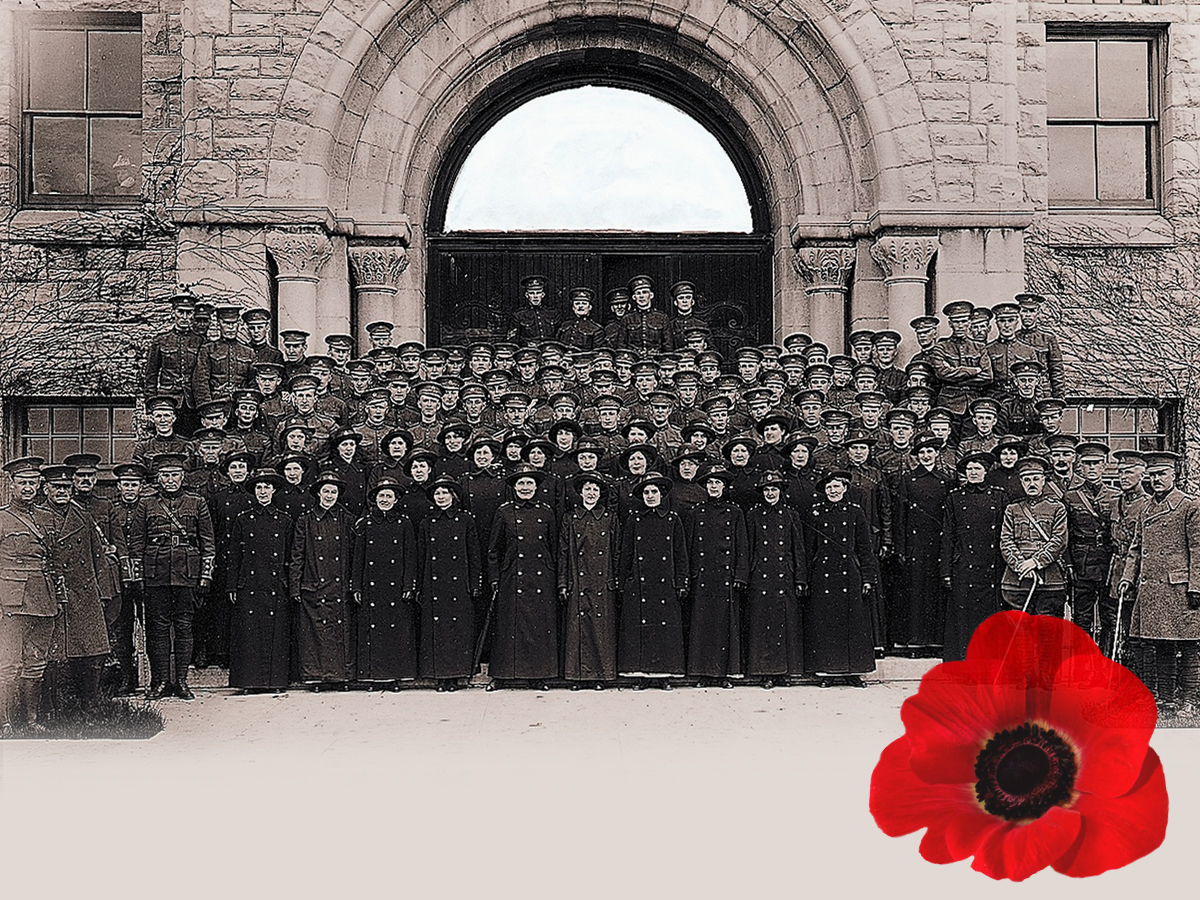 The photograph was taken in from of Kingston Hall, either in late April, or very early May, prior to the Contingent’s departure for England, where they disembarked at Plymouth Harbour on 16th May 1915. At the end of July, they were redeployed to Cairo, Egypt, to establish a new hospital to minister to casualties, mostly from the Gallipoli campaign but also “to victims of tram accidents and camel bites.” In January 1916, the unit was reclassified as “No.7 Canadian General Hospital” with the “establishment of 1,040 beds.” In its new guise, the unit, was transferred once again to France and Etaples in 1917, where it remained unit the summer of 1919. The Commander of the unit, throughout its entire existence, was Lt. Col. Frederick Etherington (former Dean of Medicine after whom Etherington Hall was named), pictured on the extreme left of the photograph.