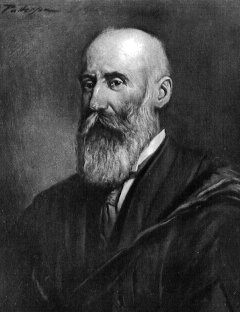 Watson was Canada's foremost early philosopher and one of the most influential academic figures in Queen's history. He was born in Glasgow, Scotland and studied Theology at the University of Glasgow, graduating with the university's highest honours in 1872.

At Glasgow, he took awards in Classics, Philosophy and English. One of his professors, the philosopher Edward Caird, was so impressed with Watson that he recommended him to Principal Snodgrass, who hired Watson as a Professor of Logic, Metaphysics, and Ethics. He arrived at Queen's in 1872, and although he found the campus and city to be horribly ugly, he admitted that "the whole atmosphere seemed to radiate with life and enthusiasm."

He served as head of Queen's Department of Philosophy for the next 52 years, retiring in 1924. He was the first Queen's professor to make a name for himself in the scholarly world and was the first philosopher in Canada to achieve an international reputation.

Before Watson's arrival, philosophy had been one of the least popular classes at Queen's. Under his guidance, it was soon one of the most popular disciplines and Professor Watson had more students applying for graduate work under him than any other professor. One student recalled that they affectionately called him "Wattie" and that he treated his students as intellectual equals.

Watson wrote eight acclaimed books and more than 200 articles, many on the metaphysics of religion, his area of specialty. He was an unusually progressive thinker and an early advocate of the admission of women to university. In one of his last books, The State in Peace and War (1919), he urged world governments to be based on tolerance and multicultural integration.

Watson had an enormous influence on the development of Queen's curriculum; in addition to teaching philosophy, he introduced the disciplines of Economics, Political Studies, and Psychology to the university. In 1889, his title changed to Professor of Moral Philosophy and he was appointed Vice-Principal in 1901, where he stayed until his retirement in 1924.

Watson Hall is named in his honour.

John Watson is buried in the Cataraqui Cemetery and his papers are located in the Queen's University Archives.