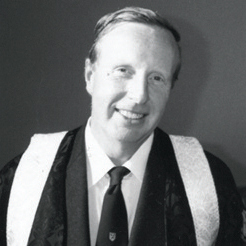 Ronald Watts, Queen's 15th Principal, was one of Canada's leading experts on federalism.

Born in Japan to Canadian Anglican missionary parents, he was educated at the University of Toronto (BAH 1952) and attended Oxford University on a Rhodes Scholarship (BA 1954, MA 1959, DPhil 1962).

He married Donna Paisley in 1954, establishing a lifelong partnership that sustained their extensive educational, scholarly and policy-oriented activities.

Watts came to Queen's in 1955 as a lecturer in philosophy, but transferred to the Department of Political and Economic Science (see Political Studies and Economics) in 1961. His early years at Queen's were broken up by occasional leaves to study at Oxford. Watts quickly took a close interest in the administration and students of Queen's, serving as a residence don in McNeill House and helping to plan the many residences built during the 1960s.

He was selected Dean of Arts and Science in 1969 and Principal in 1974. At 45, he was the youngest man to take over the Principalship since George Monro Grant almost 100 years earlier. His term coincided with a reduction in government funding to universities. His decade at the reins was thus, in his words, a time of "constraint, consolidation, and constructive change."

Nevertheless, several buildings were expanded during his term and in 1978 work was finished on Botterell Hall, a nine-story medical sciences building located next to Kingston General Hospital. Watts also launched a campaign to cut costs without hurting the quality of teaching or research at the University. Everyone on campus was encouraged to submit ideas and soon initiatives like "Turn Off for Queen's" resulted in substantial savings in energy costs and other areas. Towards the end of his second five-year term, Watts laid the plans for the highly successful Queen's National Scholars program to attract outstanding young faculty members, and also for the establishment of the School of Policy Studies.

While the number of students levelled out during this time, the number of applications to Queen's continued to soar. This allowed Queen's to develop the highest admission standards in Ontario at the time.

Watts' main academic interest was the comparative study of federal political systems. While in Political Studies, he pioneered the study of British Dominions and emerged as a leading international scholar of federalism, playing decisive roles throughout the world in organizations concerned with intergovernmental relations.

In 1989, he assumed the directorship of the Queen’s Institute of Intergovernmental Relations, and, as a fellow, was continuously involved with the institute until his death. His expertise was enlisted at the highest levels by Canadian federal and provincial governments, and by a multiplicity of countries, including Nigeria, Kenya, Uganda, Papua New Guinea, the Solomon Islands, South Africa, Yugoslavia, Pakistan and India.

He published several books, including New Federations: Experiments in the Commonwealth, Multi-Cultural Societies and Federalism, Administration in Federal Systems, and Comparing Federal Systems.

Watts also had a lifelong interest in and an encyclopaedic knowledge of aviation and aviation history. A long-time member of the Kingston Yacht Club, he was a fiercely competitive sailor who competed with considerable success at national and international levels. He owned and carefully tended several boats during his sailing career, including Viking 1 & 2, Blue Peters, Cats Wiskers and Zest.

A prolific and respected scholar, his immense contributions both to academe and society at large were recognized with five honorary degrees, his appointment as an Officer of the Order of Canada in 1979, and his promotion to Companion in 2000, and with his fellowship in the Royal Society of Canada.