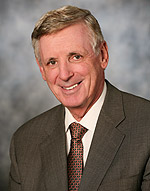 Thomas R. Williams served the Queen's community for thirty years in various capacities, including as a professor, dean and vice-principal. He came out of retirement to become the university's 19th Principal and Vice-Chancellor on May 1, 2008, following the resignation of Dr. Karen Hitchcock. He concluded his term on August 31, 2009 and was succeeded by Dr. Daniel Woolf.

During his term as Principal, Dr. Williams concentrated on addressing the growing gap between the university's revenues and expenditures. He led Vice-Principals and Deans in developing a three-year budget strategy, involved the campus community in numerous discussions, and set up a series of task force groups to deal with issues including cost control, revenue generation, communications, space, human resources and use of technology. Dr. Williams also oversaw the renaming of the former Policy Studies Building as Robert Sutherland Hall, in honour of Robert Sutherland (c. 1830-1878), the first student and graduate of colour at Queen's and one of the university's most important early benefactors.

Dr. Williams arrived at Queen's in 1977, taking up the position of Dean of the Faculty of Education, a role he held until 1986. He also served as a professor in the Faculty of Education and in the School of Policy Studies. He served as Vice-Principal of Operations and as Vice-Principal of Institutional Relations under the leadership of Principal David Chadwick Smith (1984-1994).

During his term as Principal, Dr. Williams secured funding for a new medical school building and the Isabel Bader Centre for the Performing Arts.

In October 2009, Queen's Board of Trustees recognized Dr. Williams' service to the university by awarding him the designation Principal Emeritus. On October 26, 2009, he received an honorary Doctorate of Laws from Queen's.