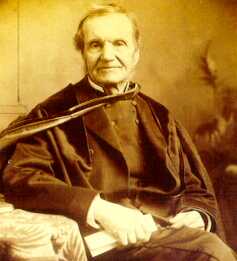 Williamson was one of Queen's best-loved and longest-serving professors in the 19th century. He was born in Edinburgh, Scotland and educated at the University of Edinburgh, where he was ordained as a Presbyterian minister in 1831.

He came to Queen's in 1842 as professor of mathematics and natural philosophy. Williamson remained at Queen's until his death in 1895. During that time, he taught many subjects in arts, science, and theology. Williamson was also Queen's first vice-principal, serving from 1882-1895. He also established and was the first director of the Queen's Observatory, raised money for the university in endowment campaigns, served as secretary for the Board of Trustees, and wrote the beginning sections of the Domesday Book , in addition to the many other contributions he made to Queen's. Williamson was very popular with the students, who affectionately referred to him as "Billy."

Williamson's first marriage to Margaret Gilchrist produced a son, James; however she died in 1847. His second marriage was to Margaret Macdonald, sister of Sir John A. Macdonald.