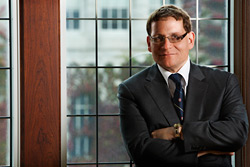 Daniel Robert Woolf became the 20th Principal and Vice-Chancellor of Queen's on September 1, 2009. He is the third alumnus in the University's history to head the institution. He is also a professor in the Department of History at Queen's.

During his service as Principal, Dr. Woolf implemented a number of organizational, management and governance changes, including the appointment of the University's first Provost (chief academic, budget and operating officer), took Queen's through an extensive series of planning exercises, and led the university into its most ambitious fundraising campaign to date, the Initiative Campaign.

Born in London, England, Dr. Woolf grew up in Winnipeg as part of an academic family. His mother taught English at university, his father was a physician and adjunct faculty member in a medical school, and his uncle was a historian.

Dr. Woolf began his academic career at Queen's, earning a Bachelor of Arts (Honours) in 1980 before continuing on to Oxford University where he earned his Doctorate (DPhil '83). He returned to Queen's as a Social Sciences and Humanities Research Council (SSHRC) postdoctoral fellow in history ('84-'86), during which time he taught in the Queen's history department. Following a one-year appointment at Bishop's University he joined the history department at Dalhousie University in 1987. Tenured in 1990, he became a full professor in 1994, later serving as both Associate Dean and Acting Dean of Graduate Studies.

Dr. Woolf is a Fellow of the Royal Historical Society, of the Society of Antiquaries of London, and of the Royal Society of Canada. As a scholar, he specializes in early modern British cultural history and in the history of historical thought in Britain and around the world. He has published widely, including many scholarly articles, several essay collections, three books on British history, and a textbook (2011) on the history of historical writing which is being translated into several languages. In 2004, he won the John Ben Snow Foundation Prize, awarded by the North American Conference on British Studies for the best book by a North American scholar in any field of British Studies focusing on the period between the Middle Ages and the 18th century.

A music enthusiast with a special interest in jazz, Dr. Woolf hosts a weekly radio show on CFRC 101.9 FM in Kingston (the longest-running campus-based broadcaster in Canada) called "Dark Glasses." He is also the first principal at Queen's to embrace social media, in particular Twitter, through which he connects with students using the handle@queensprincipal. Dr. Woolf is married to Julie Anne Gordon-Woolf and has three children, Sarah, David and Samuel, who is a Queen's graduate.