She has worked as a bartender, a house sitter, a civil servant, an actress, and a teacher. These days, Lucy van Oldenbarneveld, Artsci’89, is one of Ottawa’s most popular television newscasters.

Lucy van Oldenbarneveld has been a familiar face – and an engaging personality – on CBC television news programs for more than three years now. First, she served as host of the flagship daily newscast at 6 p.m., and since November 2009, she has been co-host of additional newcasts at 5 and 6:30 p.m..

Lucy was also well-known to radio listeners, from 2003 to 2006, as a field reporter and Friday host of CBC’s popular Ottawa Morning show, where she was an empathetic interviewer with a sense of humour and with what one fan described as “her sass and her wit.”

Lucy is so comfortable as a broadcaster that you might be  surprised to learn she only got into broadcasting by chance in 1998. It happened in the Yukon, where she lived and worked for eight years.

After graduating from Queen’s in 1989 with a BA in Political Studies, Lucy had some difficulty deciding on a career. Her frustration level grew as months went by, working as a bartender in Kingston. In the end, recalls Lucy, “I just wanted to do something, to go somewhere.” She resolved to take whatever jobs were available until the “right one” came along.

But first, where to go? Lucy chose the Yukon, after some friends told her about their own fond memories of living there. An adventurous soul, Lucy had spent the summer of 1988 hiking around the South American country of Ecuador. Then Canada’s north beckoned, and in April 2000 she packed a tent, a sleeping bag, and a mat and lit out for Whitehorse by bus and ferry – traveling via Vancouver, Bellingham, Washington; and Skagway, Alaska.

She arrived in Whitehorse to find snow still on the ground. No matter, Lucy pitched her tent and slept in the Great Outdoots for several weeks – not out of bravado, but because she had almost no money left after an unexpected, ruinously expensive taxi ride to reach Bellingham before the ferry left. Unable to afford a cabin on the ferry, she spent three bone-chilling nights sleeping on deck in her sleeping bag.

In Whitehorse, Lucy borrowed a bike and soon found a temporary job as a bartender (“It was quite lucrative,” she notes with a knowing smile.). In May, fellow Queen’s alum Dr. David Skinner, Artsci’66, Meds’71, “got me out of my tent,” as Lucy says. Skinner asked her to house-sit his log home for a month. “He helped create my love affair with the Yukon that lasted 10 years,” she says.

However, to this day, she regrets killing off some of the plants that the good doctor had asked her to water in his absence.

Over the five years Lucy spent in the Land of the Midnight Sun she worked at a succession of short-term jobs.

“That’s how life in the Yukon works, you dabble here and there,” says Lucy. She worked for the women’s directorate in the territorial government, helping to organize a federal/provincial/territorial conference. Then she caught on at the Yukon Council for the Economy and the Environment, where she helped write some reports. And for 18 months she put her Queen’s Policy Studies training to use with the Council of Yukon First Nations, assisting former MLA Norma Cassi in her fight to save the Porcupine caribou herd. “What I was doing was partly speech writing, partly policy work,” says Lucy.

While the work was interesting, Lucy decided it wasn't what she wanted as a career.

She had other talents, including theatre. Lucy acted in several little theatre productions, plays for children, and in dinner theatre with a Yukon group called the Rendezvous Comedy Review. “We sold out the show for 10 nights,” says Lucy. Later, she auditioned for--and landed--a small speaking role in a 1996 American television movie-of-the-week production about a dog-sledding murder mystery. Cold Heart of a Killer starred Kate Jackson and Corbin Bernsen.

After spending the 1996-97 school year teaching English as a Second Language in Beijing, China, Lucy returned to Whitehorse. She had concluded concluded that teaching wasn’t her calling. Instead, she decided to become an actress. A friend had written a one-woman show, and in 1998 the two of them performed it at Fringe Festivals in Edmonton, Vancouver, Victoria, and San Francisco, ending up after two months on the road with a final staging in – where else? – Whitehorse. The experience convinced Lucy of something: “I decided I wasn’t very good at acting, much as I enjoyed it, I had to find more sustainable work”.

It was at that point that Lucy chanced to meet CBC’s regional director, based in Whitehorse. He asked her to fill-in for an absent radio newsreader for three weeks, and as soon as she started doing so she knew  broadcasting was her thing.

Lucy landed a job as host and producer of the local afternoon radio program, The Late Edition. One thing led to another, and in 2000 she persuaded CBC to send her to Yellowknife, NWT, to learn about becoming a television news anchor. “I took myself so seriously back then,” she says with a laugh.

European broadcasting beckoned in 2002, and Lucy took a year's leave of absence from CBC to accept a one-year contract as an English-language host, producer, and reporter with Deutsche Welle World Service Radio, based in Cologne, Germany. Lucy’s parents were Dutch immigrants to Canada – as you might have guessed by her surname – and Lucy is “moderately fluent” in Dutch. She also speaks what she describes as “basic German”.

Several high-profile European stories broke in 2002, and Lucy covered them for Deutsche Welle and for the CBC. Among her assignments were covering the discovery of Al Qaeda cells in Hamburg, the occupation of the Iraqi embassy in Berlin by an Iraqi group calling for the ouster of President Saddam Hussein, and the murder of a prominent Dutch right-wing politician and party leader nine days before the Dutch general election. Lucy was also Deutsche Welle’s radio and television correspondent at the G8 summit hosted by the Canadian government in Kananaskis, Alberta, that year.

After her return to CBC and her move to Ottawa in mid-winter 2003, Lucy’s international horizons expanded. She accepted two invitations to teach broadcasting skills in Africa in 2003 and 2006.

The 2003 invitation came from Lucy’s former colleague and good friend, Nigerian journalist Willy Aeodele Thomas, who had headed Deutsche Welle’s African programming section. On returning to Africa, Thomas established a network of radio stations. He asked Lucy to spend a month in 2003 teaching broadcasting skills to journalists at the AFRINET stations.

Lucy recalls these East African journalists in Uganda, Tanzania, and Kenya as truly courageous people. "They believed they were there to shine the light on what’s going on in their country, and to hold decision makers responsible, whether they are government or business people, in a climate not very welcoming to journalists,” she says.

In 2006, Lucy helped Carleton University journalism professor Allan Thompson in his efforts to teach radio skills and standards for a month in the National University of Rwanda’s journalism program in Butare. Coverage of the 1994 Rwanda genocide by mainstream western media – which ignored or misconstrued the massacre of 800,000 people – and Rwandan radio stations’ ­inflammatory broadcasts inciting it, were deeply troubling. This prompted Thompson to establish links between the two universities’ journalism programs, with support from the Canadian International Development Agency.

One of her most moving experiences in Rwanda was a five-hour trip to the village of Kinihira in northern Rwanda. She and her colleague Peter Bregg, chief photographer for Maclean’s, went to deliver $3,000 to the village school. “Hundreds of children came running from every direction to greet us,” Lucy recalled.

Students at St. Luke’s School in Ottawa raised the money after hearing a talk by General Romeo Dallaire. He told them about visiting the Kinihari school twice, before and after the genocide.

The once-thriving school in its beautiful setting, that he saw on his first visit, was just an empty shell on his return. It broke his heart to know that the reopened school now had no basic supplies – no desks, chairs, books, paper, pencils, or even blackboards for teachers to write on. The Ottawa children had raised the $3,000 to buy all these things and more that teachers needed. They also sent personal letters and photos to the Kinihari children.

Lucy told the moving story of her Rwandan visit and many others to the Ottawa Over-50s group, as the guest speaker at a November 2009 luncheon meeting. Her talk was titled "Working on Four Continents: North America, China, ­Europe and Africa."

If all goes as planned, Lucy says she may soon return to Nigeria, where she hopes to help more journalists hone their radio skills. 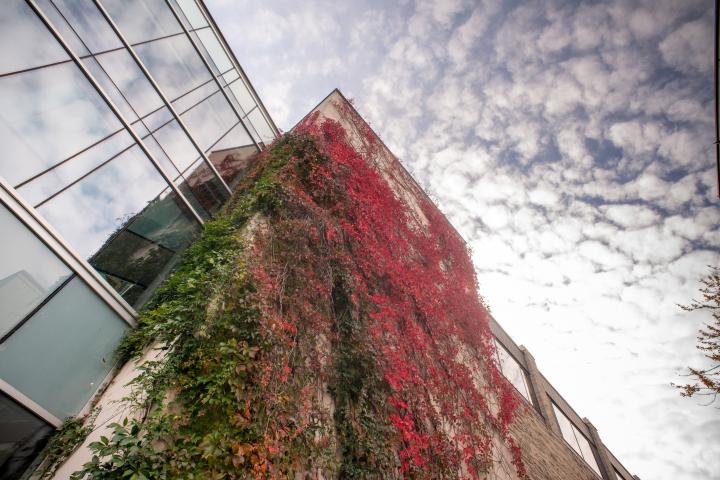 Meagan Fitzpatrick, Artsci’02, is one of the rising stars of CBC’s national political affairs reporting, and all because she dared to ask a previous employer for her own desk
View A passion for politics and journalism 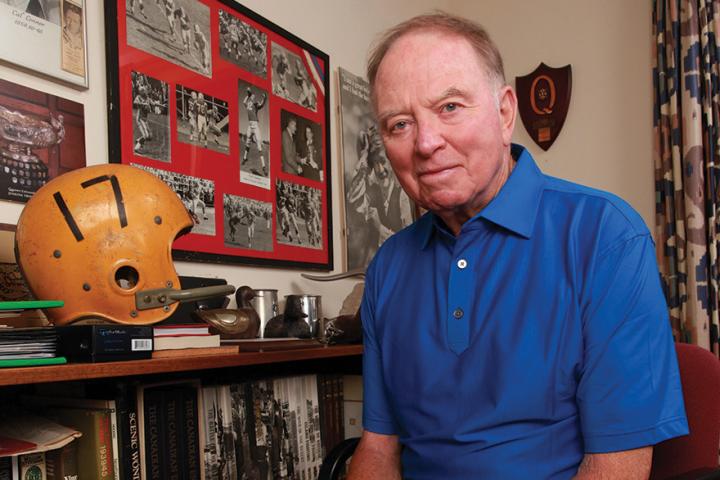 Cal Connor first played football for the Gaels in 1958, when he was in the first year of his...
View The active life: Cal Connor (Arts'62 Meds'66)
Top