Even a battle with cancer isn’t stopping Dr. Balfour Mount from living his life to the fullest … or writing about it.

Balfour Mount, Meds’63, LLD’02, has been working well into the wee hours of the morning, writing his life story and his parents’ biography combined.

At age 74, the veteran Montreal surgical oncologist, who’s been called “the Father of ­Palliative Care in North America,” is so dedicated to finishing his book that he declines to answer questions in detail by email. He doesn’t want to waste any energy that he could otherwise spend on writing. Yet, when I ask this remarkable man about how he revolutionized the way North Americans comfort the terminally ill and think about dying, his answers are clear, insightful, and in depth. He talks eloquently for more than 10 minutes. What makes this somewhat surprising is that he’s speaking and breathing through a hole in his throat.

The doctor has battled disease for years in personal as well as professional ways – first testicular cancer at 24, just after graduating from Queen’s medical school, back when the cure rate for that type of cancer was only about 33 percent. Then in 2000, cancer attacked his esophagus, requiring surgery, radiation, and chemotherapy. This cancer later spread to his neck, leading to his tracheostomy in 2007.

“It sounds rather dramatic, but, thankfully, it isn’t,” he says.

A tracheostomy not dramatic? “It’s become normal for me,” he says and then hastens to add, “As ­Elton John sings, I’m still standing! I now have no evidence of this ­disease, remarkably. I have no idea why that’s the case. I’m a very lucky guy.”

Mount may see himself as being “lucky,” but others bestow more distinguished ­descriptors on the good doctor. He’s been hailed as being among the “compassionate vanguard of palliative care” for having ­pioneered the Royal Victoria Hospital’s ­Palliative Care Service in 1975. He’s the founder and former director of McGill ­University’s Palliative Care Divisions, ­originator of the McGill Program in Integrated Whole Person Care, and founder of Montreal’s biennial International Congress on Palliative Care. He’s an Officer of the ­Order of Canada, an Officer of the Order of Quebec, and an honorary graduate of Queen’s, the U of ­Calgary, and Dalhousie.

“Let me read you something that I think is relevant,” he says. Mount – “Bal” to family and friends – politely ­excuses himself a moment to fetch his copy of a book called Man’s Search for Meaning. Written by Viktor Frankl (1905-97), an Austrian neurologist and psychiatrist who was also a Holocaust survivor. The book is a source from which Mount is fond of quoting.

“I met Viktor and hosted him when he visited Montreal. He was a very interesting guy. He said that he wrote his book in eight days, when he got out of Auschwitz.”

Mount explains that Frankl one day was on a forced march, carrying picks and shovels with other prisoners. “It was early dawn, freezing cold, and he had no clothes to speak of. Suddenly, he thought of his wife, and their love was present to him in a way that was profoundly real. He realized she might not be alive – and the reality that she, indeed, had been killed by the Nazis was something he didn’t know yet – but he realized that it didn’t matter whether she was alive or dead. What was important was the attachment they had. And then he wrote …” and Balfour reads from Frankl’s book, slowly, carefully, voicing great respect for the power of the ­author’s words: “Everything can be taken from a man but one thing, the last of ­human freedoms: to choose one’s attitude in any given set of circumstances. To choose one’s way.”

Then he’s quiet for a moment, allowing each word to be fully digested. “Now, when I start feeling sorry for myself or feeling hard done by – by the economy, the government, or whomever – I think of Viktor Frankl. Auschwitz was a pretty tough school. No matter what problems I may have or fantasize I have, they sure aren’t in the same league as Auschwitz. If Viktor Frankl could find a pathway to transcend his challenges there, I’m pretty poor stuff if I can’t do the same in my own situation.”

It’s hard to believe someone who has battled cancer since his early 20s can be so accepting about serious illness. Has his work in palliative care helped him? “I suspect it has,” he says. “At the very least, it’s meant that I see life as an existential experience.”

While practising as a surgical oncologist, he pioneered the Royal Victoria Hospital’s Palliative Care Service after a study of the needs of those with life-limiting ­illness disclosed deficient care of the dying at the McGill teaching hospital. It quickly became clear to him that, “to die at that hospital was a catastrophe,” despite it being one of Canada’s leading teaching hospitals. He says the result of his study became “an odyssey in which the dying and their families became my teachers.”

Today, he adds, “to die in most hospitals is still to experience isolation, inadequate treatment, and skills. Everywhere.”

Has there been no improvement? “Yes. In the last 40 years we’ve seen improvement in the care of the dying,” he says, “but I think the question is, ‘Why hasn’t there been more improvement?’ For ­instance, here we are yet again discussing physician-assisted suicide.”

Mount is passionate on this topic, ­being one of 500 Quebec doctors in the Physicians’ Alliance for Total Refusal of Euthanasia and having signed a declaration that calls on the province to stop its push for “dying with dignity” legislation. In May, he spoke in downtown Montreal to a crowd that had gathered to protest this legislation being adopted.

“In my view, it would be a colossal mistake to legalize physician- assisted suicide,” he says. “It’s fraught with perils.”

He feels there is “a great misunderstanding” on the public’s part about palliative care in hospitals. “People are concerned about an onslaught of treatment. They want the right to stop treatment, but that right is already theirs – ours – to begin with. We can refuse or withdraw from any treatment.”

Misconceptions exist in part because these are complicated issues. “People don’t want to die with tubes coming out of every orifice. They want to die at home, but many aren’t aware that that option is there; they already have that freedom.”

As Mount voices those words, one of his dogs barks outside his office door for the umpteenth time, and Mount calls out to his 18-year-old daughter Bethany, “Would somebody please kill the dogs!” It’s a delight to hear this thoughtful, compassionate man pull off such a joke. He adores his two canine companions, Holly and Ivy. “We already had Ivy, and the dog that chose us at the pound, as it turns out, had the name Holly,” he explains with a laugh, “so it’s not as corny as it sounds. But we’ve been living it down ever since.”

His voice crackles with enthusiasm when he speaks about his wife, Linda, his children, his dogs, and his writing. “Life is wonderful. It just keeps getting better and better,” he says.

Mount says that writing his book is a privilege and “the best time in my life.” He’s amazed at how fresh his memories feel. “I remember my time at Queen’s with startling detail. I was a cheerleader, among other things. That was an age when you only had to be able to stand up and shout to be a cheerleader! You didn’t need to be a skilled gymnast, as you do now.”

His work in progress chronicles his life story as well as those of his mother, Maude Adeline Henry, and his father, Dr. Harry Telford Roy Mount. Harry was a farm boy who had finished only two years of high school before he volunteered for military service in World War I. Having fought at Vimy Ridge and Passchendaele, after the war he was granted entry to U of T medical school as a veteran and eventually started the neurosurgery unit at the Ottawa Civic Hospital.

Balfour Mount has been working on his book for five years, and is now talking with a publisher who will bring the story into print, probably with the title Ten Thousand Crossroads. As Mount explains, “In each moment in life, in each situation, we’re faced with options. We’re always at a crossroads. But we have the ability to choose our response.

“We’re only limited if we choose to see our limitations.” 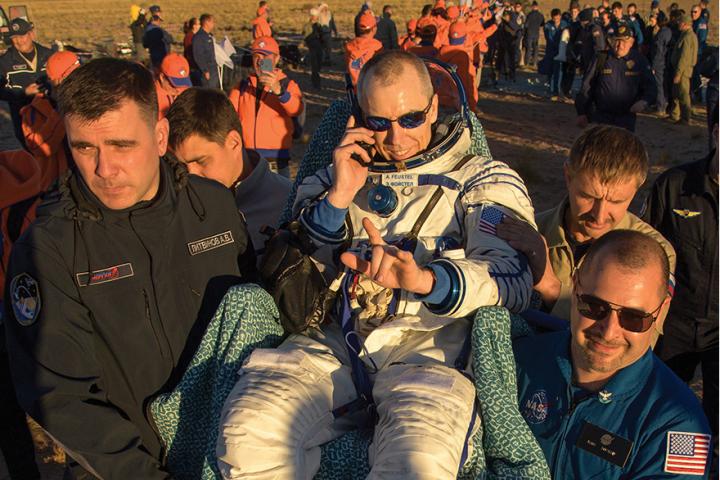 On October 4, Drew Feustel and two colleagues came back to Earth. At 12:55 that morning, they had...
View The long commute: Drew Feustel's working life, from underground to orbit 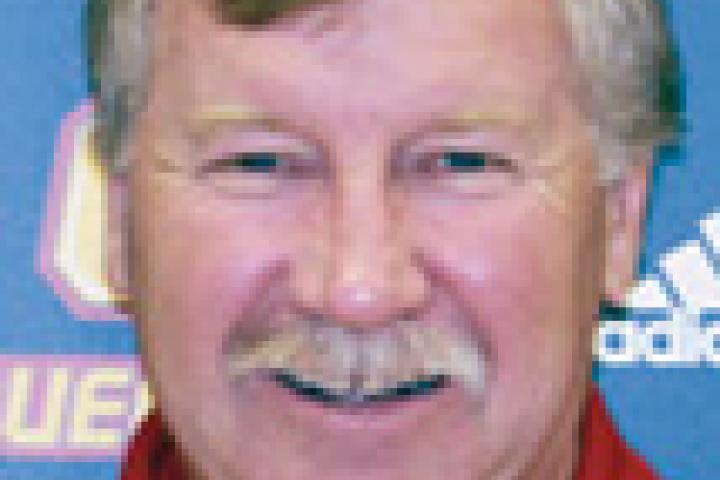 Dave Ross, the coordinator of athletic therapy services at Queen’s for the past 29 years, has...
View Dave Ross retires
Top