A championship season takes years to orchestrate. Coach Pat Sheahan discusses the competitive world of football recruitment and his strategies to find the best student-athletes to join the Gaels.

A select group of football players don the Tricolour every year and set out on a quest to bring the Vanier Cup back to campus. How those student-athletes come to play at Queen’s is often the result of another high-stakes competition that plays out largely behind the scenes.Pat Sheahan’s office is tucked away deep inside the Athletics and ­Recreation Centre. On his desk sits a projector aimed at a blank white wall, ready to be fired up anytime he wants to review film of a possible recruit.

For Coach Sheahan and his staff, recruitment is a constant and ongoing process. Gone are the days when Sheahan would start scouting players after the Gaels season ended in late fall. Earlier player identification and contact with potential recruits is key.

“Now a lot of that [recruitment] work is done in the spring prior to the high school student’s final season,” he says. “It’s an ideal time to inform the student-athlete about the academic programs and the entrance requirements. The earlier we get that information in their hands, the better off they are going to be and the better off we are going to be, because we will have more available candidates at an earlier time.”

Football staff members search coast to coast for ­talented high school players who meet Queen’s high academic entrance standards. Convincing them to select Queen’s is no easy task, given that outstanding athletes with great marks are in high demand and have any number of choices when it comes to their post-secondary education.

“Recruiting is all about relationship building and creating a comfort zone,” Sheahan says. “My standard approach is that when we meet an ­outstanding student-athlete, we try to find out what he wants to do and how we can help him get there and achieve his life goals.”

Over the years, Coach Sheahan has found that outstanding student-athletes demand both a strong academic and football experience.

“The good news is that there’s a good message coming from Queen’s. Our graduates are highly employable; the numbers speak for themselves. The atmosphere is second to none. Usually the visit to campus here is a life-changing experience for many of them, and the reputation of Queen’s is strong,” he says. “The whole idea of coming to Queen’s and going to professional schools after is an attraction for some.”

Sheahan’s first experience recruiting athletes came in the early 1980s as a coach with a ­community football program in Montreal. He was responsible for co-ordinating recruitment as an assistant coach with the McGill Redmen from 1984 until 1988.

Even as a head coach, first with the Concordia Stingers from 1989-99 and now with Queen’s since 2000, Sheahan has chosen to stay heavily ­involved in identifying and recruiting players. “As the head coach, I am running the team so I have to make sure the guys [we are recruiting] fit in here. If you are not involved in the recruiting process from the ground up, it’s very hard to have a feel for their character.”

Recruiting has become more aggressive over the years, according to Sheahan.

To keep up with these demands, university football programs have added more coaches over the years. Bishop’s University paved the way in the 1980s when it boasted five full-time coaches at a time when most football programs only had one full-time staff member. As a result, according to Sheahan, the Gaiters became a powerhouse that consistently beat every other team to the punch in recruiting. Other teams have adjusted to keep up, with Queen’s recently adding a fourth staff member responsible for recruiting.

As teams have poured more resources into ­recruiting, the student-athletes have become savvier about the process, Coach Sheahan says. They take opportunities to visit multiple campuses and meet with several different head coaches.

“You need to be tight and professional. Sometimes the quality of your program gets evaluated by the way you recruit,” he says.

While Queen’s football is always looking to recruit the best student-athletes, the coaching staff must also consider the team’s needs in the coming ­seasons. They project which players they expect to graduate and which positions they will need to fill over the next couple of years.

The Gaels aim to bring in enough players every year to replenish the program, while at the same time avoiding a backlog of talent at individual positions that would result in new recruits sitting on the sidelines for several years. As a general rule, Queen’s strives to recruit 15 blue chip prospects each year with an additional 15 to 20 players who may require extra time to develop in the system.

Coach Sheahan says Queen’s avoids bringing in a high volume of players in hopes of finding a few who will actually play on the team.

“What happens to the 30 or 40 kids who have been recruited under the football dream and don’t make the team? With every kid we get here, we want to have defined a career path for that young man as quickly as possible. He needs to know where he’s headed, and we need to know where he’s headed,” he says. “If he can’t play the position we thought he could play or he thought he could play, we need to find out quickly if he can play ­another position because we don’t want to have a bunch of square pegs for round holes here. That doesn’t create the desired chemistry and you won’t advance as a program that way.”

Take a walk around campus during the spring and chances are you will spot Pat Sheahan leading a ­recruit and his family on a campus tour. He is very much part of the “long grind,” as he characterizes recruiting, identifying and evaluating players and following up with countless phone calls and ­messages.

In recent years, he has employed those same ­relationship-building skills to bring members of his own family into the Queen’s fold. It took a “little bit” of recruiting to convince his sons Ryan (2001-2004) and Devan (2006-2010) to commit to Queen’s. Both have gone on to serve on their father’s ­coaching staff at Queen’s after their playing days.

Together, the Sheahan trio celebrated the Gaels’ last Vanier Cup victory in 2009. With Pat and Ryan coaching on the sideline, Devan caught a key touchdown in the national championship game.

Looking back, it’s easy to see that legendary Vanier Cup game as a singular event. However, a championship season takes years to orchestrate, as Coach Sheahan is fond of saying, with the ­arduous recruitment process providing the ­foundation for the eventual masterpiece.

“Recruiting isn’t a perfect science,” Coach Pat Sheahan says. He remembers several players who didn’t pan out after demonstrating tremendous potential in secondary school. And then there are those players he held out hope for, long after other members of his coaching staff had given up.

Queen’s recruited Giffin from Bayridge High School in Kingston. As Sheahan recalls, the ­running back was an outstanding player who needed to grow up.

“The way he operated, some of our coaches thought he wasn’t going to amount to much,” he says. “I knew Mike’s high school coach at the time quite well, and he told me, ‘don’t give up on that guy. I’ve seen that when you touch the right ­buttons and he gets motivated, he can take over a ball game.’”

Queen’s stuck with Giffin, and he eventually developed into a star player, a two-time 1,000-yard rusher and runner-up for the Hec Crighton trophy in 2008 as the most outstanding player in Canadian Interuniversity Sport football. Just as importantly, he demonstrated a willingness to do the little things that help teams win.

“When Mike started off, he would be in a protection meeting and you would catch him not ­paying attention. At the end, he was instructing other players about who they had to watch. You just saw this metamorphosis happen,” Sheahan says. “I though the Queen’s experience was going to be life-altering for Mike, and it was. He grew up here at Queen’s and in Queen’s football and became a man. And the ­results are there: he went to play in the Canadian Football League and win two Grey Cups.” 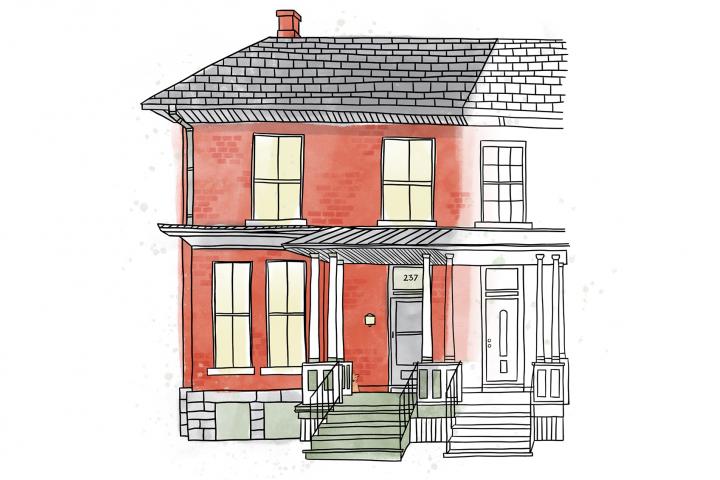 Mice, bats, and a killer staircase

Fall of 2016: Kim Chatterson (BA’92) is skimming her Facebook feed when she comes across a post by...
View Mice, bats, and a killer staircase

Work to be done

It’s time to roll up our sleeves and begin the work of building an inclusive campus community...
View Work to be done
Top