The early 13th century was not a good time to be an ­English noblewoman. According to the laws and ­customs of the land, the widows of barons and knights were ­supposed to receive an inheritance and the ­freedom to choose whether they wanted to remarry. A noblewoman’s first marriage was ­determined by her family and when she married, her property was controlled by her husband. Only a widow had control of both her property and marital ­status. William the ­Conqueror’s youngest son, King Henry I (1100 – 1135), decreed in his coronation charter that a ­noble widow “shall have her dowry and right of ­marriage, and I will not give her to a husband unless ­according to her will.”

By the reigns of King Richard I “the Lionheart” (1189 – 1199) and his younger brother King John “Lackland” (1199 – 1216) those rights were under threat. Both kings needed additional income to fight their ­military campaigns: Richard was one of the leaders of the Third Crusade and John spent much of his reign fighting King Philip II of France for control of his family’s ancestral territories in ­Normandy, Maine, Anjou and Aquitaine. In these circumstances, Richard and John ignored the terms of Henry I’s coronation charter and sold the right to marry to noble widows to their supporters, confiscating the inheritances of women who refused the second husbands chosen by the king. For example, John was offered 50 marks and two palfrey horses from a knight named Ralph Ridell for the right to marry ­Alice, the widow of John Belet. Only when Alice’s ­father offered twice that sum to the king was Alice allowed to ­exercise her ­traditional right to decline a ­second marriage.

John’s barons were outraged by the sale of the right to marry noble widows because these forced marriages threatened the established prerogatives of the ­nobility as a social class. ­Noblemen feared that if their wives were compelled to remarry, the second husband might squander the ­inheritance, leaving the children of the first marriage without lands or income when they came of age. The sale of the right to marry ­noblewomen also gave wealthy merchants the opportunity to marry into the nobility. In medieval England, the social hierarchy was strict and the marriage of a noblewoman to a husband outside her social class was called disparagement.

In John’s England, there did not appear to be any powerful women who could influence the king to uphold the traditional rights of noble ­widows. John’s mother, Eleanor of Aquitaine, had ruled a quarter of modern France in her own right, joined the ­Second Crusade and supported a rebellion against her husband, Henry II, on behalf of her sons. In contrast, John kept his young queen, ­Isabelle of Angoulême, firmly in the background. Isabelle was only 12 when John broke her ­previous betrothal and married her himself in 1200. When Eleanor died in 1204, Isabelle did not inherit her mother-in-law’s lands in England and John kept the “queen’s gold” that was supposed to be part of his wife’s ­income. Without control of money or lands, ­Isabelle could not exercise significant cultural or political patronage as previous queens had done. Noblewomen who appealed to Isabelle to ­intercede with John found that the queen had ­little influence.

After years of growing discontent, John finally lost the support of a key faction of barons after ­being defeated by Philip at the Battle of Bouvines in 1214. Stephen Langton, the Archbishop of ­Canterbury brought together the grievances of John’s discontented subjects in a Charter of Liberties that would become known as Magna Carta: The Great Charter.

When John’s rebel barons and clergy compelled him to accept Magna Carta in 1215, making him the first English monarch to ­accept limits on his power imposed by his subjects, the inheritance and marriage rights of ­noblewomen were featured in clauses 7 and 8 of the Charter ­respectively, after the terms guaranteeing freedom for the church and inheritance rights for noble heirs but far above the famous clause 40, “To no one will we sell, to no one deny or delay right or justice.”

The rights for noble widows in Magna Carta are unequivocal. Clause 7 began, “At her husband’s death, a widow may have her marriage portion and inheritance at once and without trouble,” followed by clause 8, “No widow shall be compelled to marry, so long as she wishes to remain without a husband.” The rights provided for noblewomen in the coronation charter of Henry I in 1100 were upheld by Magna Carta in 1215.

Magna Carta was not a ­document that advocated ­gender equality. Clause 54 of the Charter made clear that a woman’s testimony in court was valued less than that of a man, stating, “No one shall be arrested or imprisoned on the ­appeal of a woman for the death of any person ­except her husband.”

The question of whether the equality before the law codified in Magna Carta applied to women was not explicitly stated until the 15th century when it was ­affirmed that “ladies of great estate” were protected by the ­Charter. ­Noble widows were a tiny elite within English society at a time when 90 per cent of the population was peasantry. ­Nevertheless, the acknowledgement of even ­limited rights for women in Magna Carta inspired future campaigns for women’s equality in politics and before the law.

In 1915, the 700th anniversary of Magna Carta, British suffragist ­Helena Normanton wrote a ­treatise comparing the rebellion against John in the 13th century to the ­struggle for women’s suffrage in the late 19th and early 20th centuries.

Normanton wrote, “The power of the crown has long ceased to be a source of tyranny for women…It is parliament which is for women an unchecked despot, whether its despotism be beneficent or malignant. It is for women to end that tyranny by striving ceaselessly to obtain the franchise, and by taking all labour for her province to acquire that economic power which is the most potent lever to thrust from her cramped limbs the dead weight that oppresses her.

The message which Magna Carta brings to those who can read into its aged yellow parchment the story of all the efforts and thoughts it enshrines from the past is one of mighty encouragement an perennial hope.” The treatise followed in the ­tradition of 18th ­century political tracts that ­advocated a larger role for women in the public sphere ­including The Declaration of the Rights of Women and the Female Citizen by Olympe de Gouges and The ­Vindication of the Rights of Woman by Mary ­Wollstonecraft.

Eight hundred years after Magna Carta, the right of ­freedom from forced marriage continues to be ­reaffirmed in modern human rights legislation. ­Article 16 of the United Nations Universal ­Declaration of Human Rights states that “Marriage shall be entered into only with the free and full consent of the intending spouses” and that men and women “are entitled to equal rights as to ­marriage, during marriage and at its dissolution.” This provision was not accepted by all United ­Nations member states when the Declaration was created in 1948 and equal rights for women within marriage remains an ongoing struggle in various regions of the world today, demonstrating the continued importance of Magna Carta. ­

2015 is the 800th anniversary of Magna Carta. An original 13th-century engrossment of the famous Charter is touring Canada this year. Carolyn Harris, MA’07, PhD’12 (History), author of Magna Carta and Its Gifts to Canada, discusses the impact of Magna Carta on women's rights.

Step by step: Unravelling the secrets of walking

Queen’s engineering team has designed a device that saves a little energy for people who are on...
View Step by step: Unravelling the secrets of walking 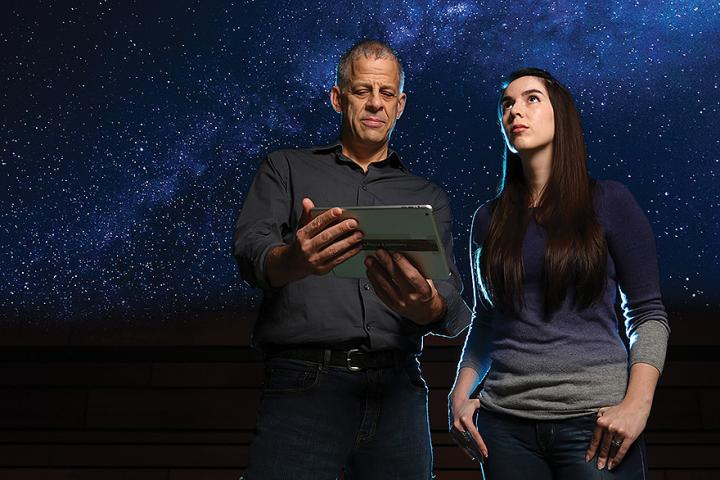 With the world’s attention on Queen’s physicist Dr. Art McDonald after he received the Nobel Prize...
View Extra-galactic astronomy
Top