Here’s how Sept. 29, 2020 was supposed to unfold for Rebecca Maciver, PhD’20 (Pharmacology and Toxicology):

On the day that culminated 12 years of study at Queen’s, she would get up, feed her cat Coco, drive the few blocks to Crave Coffee House, pick up eight coffees and her favourite cinnamon buns, and make her way to a room on campus where the members of her thesis defence committee would be waiting.

Then, after a couple of hours of rigorous inquisition, collegial cut and thrust, and delicious pastry, the newly minted doctor would repair to the student office near the pharma-tox labs where fellow students would be waiting with cake and hugs. The celebration would segue into a leisurely restaurant lunch and continue through the day and into the evening. Oh, and at some point, she would call her parents in Oshawa.

Of all Maciver’s expectations for that Friday, here is what came to pass: she fed her cat, got her doctorate, and called her parents. The defence of her thesis was an impersonal online affair in which she spoke to committee members one by one. No cut, little thrust. Also, no cake. No hugs. No lunch. Not even a congratulatory handshake. Too risky.

“I mean it was very exciting, because I finished my PhD, and a number of years of very hard work… t was just a very different experience than I imagined.”

That could be the motto for the class of 2020: “It wasn’t what we imagined.” The COVID-19 pandemic delivered a graduate experience unique in the annals of Queen’s alumni. It was the year when it seemed everything stopped but nothing really ended. For these graduates, the final few weeks of their careers at Queen’s were robbed of everything that made them special: faculty formals, program award galas, farewell pub nights with friends you might never see again – all the milestones that mark the end of a long journey. Writing for Psychology Today in May, anthropologist and psychotherapist Rebecca Lester warned about the erosion of ritual during the pandemic. Rituals and, more specifically, rites of passage, define the “beginnings and ends to developmental or social phases… They do not only mark time; they create time,” she wrote.

Without rites of passage, we can be stuck in a kind of limbo, according to Lester. The road to limbo for the class of 2020 began when Queen’s announced the end of classes on March 13. Faced with an unprecedented situation, the university followed government and public health guidelines and, like other post-secondary institutions across the country, put the safety of students, faculty, and employees first. But for those who were rapidly approaching graduation, this raised questions. What next? Where next?

Many out-of-town students, such as 22-year-old Calgarian Ellen Barss, Com’20, scrambled to find a way home. “I was working on an assignment that was due that weekend, but at the same time I was on hold with Air Canada. The website had crashed, and I was on hold for like four hours. We were all trying to change our flights from the end of exams in April to March. It was chaos.”

Political Studies student Chayce Perkins, Artsci’20, had little time to get her own affairs in order. As president of the Arts and Science Undergraduate Society, she had 13,000 other students to think of. On the day of the shutdown, she bounced from one student government emergency meeting to another, wrestling with a problem that was changing on the fly.

Nobody had any idea what to do. [All faculties] had major end-of-year events planned. Students were getting in touch, scared about what would happen … There was lots of uncertainty, lots of panic. I remember everybody was so tired,” Perkins, 22, says.

Over at the School of Nursing, director Erna Snelgrove-Clarke was wondering what to do with scores of nursing students doing practicums in hospitals and clinics in Kingston and surrounding areas. The students needed their clinical hours and the virus hadn’t yet had a significant impact in Kingston, but some students and some of their parents were getting concerned. The faculty kept up clinical practice for another week, becoming the last nursing school in the country to pull their students out of hospitals, says Snelgrove-Clarke.

“We had a phenomenal group of students who wanted to do everything they could possibly do to keep this going,” she says.

The unease that followed the shutdown was campus-wide, but the sense of loss was particularly sharp among the class of 2020. Almost immediately, faculties announced the cancellation of grad formals, events that were in some ways more anticipated than convocation.

A month earlier, Ellen Barss had lined up with her friends to buy tickets for Comm Prom, a banquet and gala whose trappings would take up most of a day, from a picture-taking reception to an after-formal party.

"We had heard a lot about it, and we had seen our peers go through it every year since first year, and so it was kind of a big milestone to hit,” says Barrs.

And now it was gone, along with an annual faculty send-off called the Dean’s Scene.

Awards galas also fell by the wayside. Global Development student Gillian Baker, Artsci’20, realized her parents wouldn’t be coming from Carleton Place to see her receive the Volunteer of Distinction Award from the Queen’s Student Alumni Association. Within three days of the shutdown, it was clear that spring convocations would not take place. “I had the best four years at Queen’s and just thought it would finish with a big hurrah,” says Baker. “And you didn’t get that. You just trickled home; there was no cut off or ending... and we were left to scramble and ask, ‘Okay, what now?’”

As students resigned themselves to their loss, the virus found other ways to make them miserable. Isolation took its toll. After weeks of working on her PhD thesis in the gloom of her basement apartment, Rebecca Maciver found her motivation waning. “I wasn’t really seeing the end of the work… It had been a couple of months of self-isolation and I think it just really started to take its toll.”

She came up with what she called her “COVID holiday”: sitting in the passenger seat of her Ford Fiesta parked close enough to her apartment that she could still get a Wi-Fi signal. She brought water and snacks and played the radio while she wrote. “The only thing was that every couple of hours I had to come in and chargemy laptop.”

Sheikh Hamza Rizwan, MEng'20 (Civil Engineering), was a world away from his family when the pandemic took hold. When Dubai closed its border, he had no choice but to stay at Queen’s. Rizwan, 23, coped pretty well until his uncle, his mother’s brother, contracted COVID-19 and spent a tense week in an ICU in Lucknow, India.

“If I had been with my mom, I think I would have felt a little bit better, I would have peace of mind that I’m next to my mom trying to console her," Rizwan says.

Rizwan, like many in the class of 2020, has been unable to move on from the COVID limbo. Economic collapse means that jobs are few and far between, and competition particularly fierce.

Harneet Kang, MIR’20 (Industrial Relations), has been applying for jobs in human resources since the summer without getting even a nibble. She’s starting to believe rumours from friends in the HR field that some companies are posting jobs as a COVID-era PR exercise without really intending to hire.

"It’s hard. There have been weeks when I’ve felt so down about how stagnant life has felt for the last however many months,” she says. “This is going to sound really sad, but it’s difficult to find purpose right now for me.”

Maybe, she says, the experience will toughen up the class of 2020. “It’s not the ideal time to be graduating and on a job hunt and starting off our careers and our adult lives… but also it will hopefully teach us different skills, ways to overcome challenges in our life.”

Chauntae De Gannes, Artsci’20 (Sociology and Global Development), would endorse that sentiment. She recalls a wholesale sense of displacement on campus after the shutdown, “a loss of self.” But, she says, “it’s important to step back and put things in perspective… Our lives are in the future, not in the past."

Sheikh Hamza Rizwan notes that the changes wrought by COVID on the class of 2020 were not all bad.

"One of the things I noticed is how it brought a sense of unity among everybody. The students and staff…they all became more empathetic, more understanding to other people.”

Rizwan credits, in part, the awareness of the virus that Queen’s engendered through its social media platforms. “I think it should be applauded for that.”

Gillian Baker says she wouldn’t be happily employed as an education coordinator with the Oxford Learning Centre if it weren’t for COVID. Baker has been aiming towards a career in education since realizing how much she liked teaching while volunteering as a peer educator with Queen’s Health Outreach (QHO).Before the COVID disruptions, Baker was to have spent the summer in Guyana, helping with a QHO health awareness project. She was disappointed when the project was cancelled, but thrilled when it left her available to take the Learning Centre job. She sees it as the perfect way to spend a year before returning to Queen’s to take the teacher education program.

Karen Bertrand, Vice-Principal (Advancement), sees an unassailable resolve arising from the unique challenges faced by the class of 2020. “This is a class like no other, and they have been united in a collective struggle that is unlike anything we’ve seen for generations. In so many ways they have faced an unfair share of disappointments, but their determination and resilience have really given all of us great hope for the future,” she says."

"They have already proven that they have what it takes to be successful, no matter what." 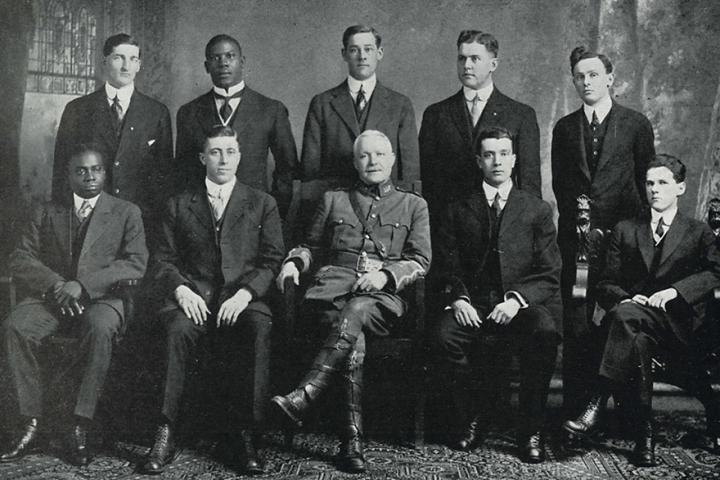 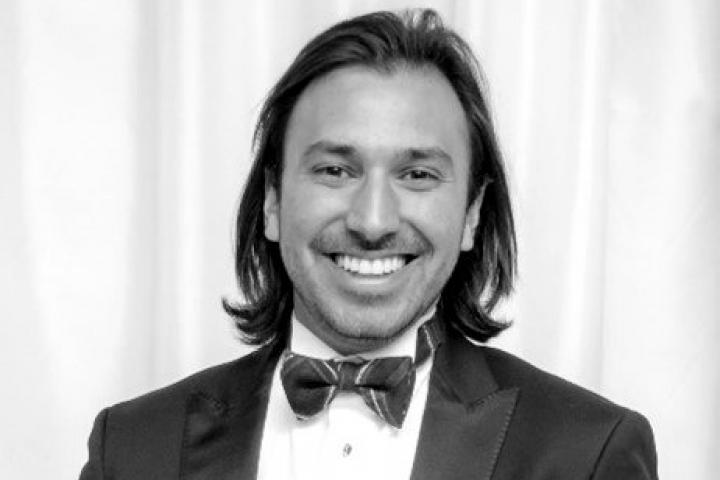 The Queen’s University tricolour has been a symbol of pride for our alumni for generations. The blue...
View A new light
Top