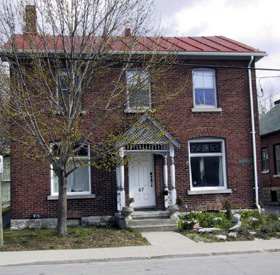 Queen's became a university in more than name on this north-end Kingston street in 1842. On March 7 of that year, the University's first classes were held in a small frame house at 67 Colborne Street, Queen's first home. Two professors - Principal Thomas Liddell and Rev. Peter Colin Campbell - and 13 students were present, including Thomas Wardrope.

The professors immediately held exams for the students, seven of whom were studying for the Presbyterian ministry, on the first three books of Virgil's Aeneid and the first three of Caesar's Commentaries. Ten students passed and were admitted "as members of the University"; the other three were invited to stay and make what progress they could with the help of tutors.

Queen's stayed in the rented house for only six months, after which it moved to a stone house on Princess Street. The original Colborne Street house still stands. It is now a family residence.