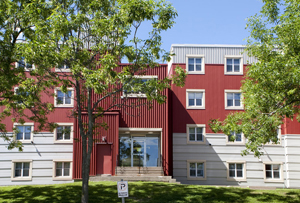 Built in 1974, Jean Royce Hall is a collection of student residence buildings on west campus, many of which are interconnected. It is named after Jean Royce, Queen's Registrar for 35 years (1933-1969).

Jean Royce Hall is unique at Queen's in that it houses graduate and undergraduate students together.

The 12 individual houses within the 550-bed complex are named after various former faculty and Trustees: