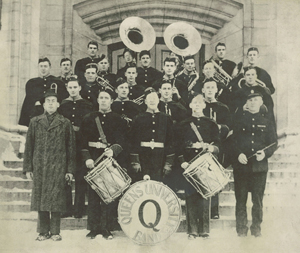 Queen's Bands are called "bands," plural, because there are actually six of them:

They perform at Queen's football games, appear together or in separate units at major university ceremonies, and represent Queen's at numerous parades and events across Canada and the United States.

The Bands got their start in 1905, when a few first-year students decided to form a marching brass band "to help things along at football games." But the idea did not gain easy acceptance. The 12 original musicians, including John Stirling, Queen's Chancellor from 1960 to 1974, suffered verbal abuse on parades to the football field and were ejected from the equipment room, where they practised, by the football team. 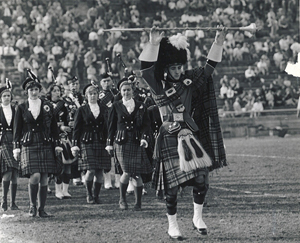 The group dissolved after just two years and it was not until 1920 that a marching band reappeared. The revived band, unlike the original group, had its own instruments and even uniforms: white duck trousers, tricolour sweaters, and Queen's tams. The now traditional kilts were adopted only after the Second World War.

A pipe band was added to the troupe in 1925 but did not become a permanent fixture until 1938, at which time highland dancers also appeared. It is unclear when cheerleaders first joined the Bands. "Rooters clubs" were formed early this century to lead students in cheers at Queen's games and appear to have gradually become informally, and then formally, linked with the Bands.

Around the time of the Second World War, the Queen's Bands wore the Canadian Army uniform. Shortly after the war, the Bands adopted their current uniform which is similar to that of a traditional Scottish Military uniform.