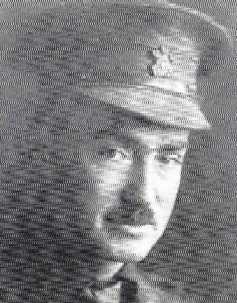 Born on September 14, 1886, George was the younger brother of James Armstrong Richardson (later the Chancellor of Queen's) and Agnes Richardson Etherington (who donated her house to Queen's as an Art Centre).

George Richardson graduated from Queen's with a BSc in 1906 and was a star player in both football and hockey during his time here. He was a fair and honourable player, and was never penalized for a misdemeanor or violation of the rules. Once, at a hockey match in Ottawa, the referee gave him a penalty for a violation he had not made. Richardson said nothing and went to the box. The referee was said to be so embarrassed by his gracious acceptance of his call that he later went to Richardson and apologised, saying that he realised he had called the wrong man, but did not want to admit his error mid-game.

Richardson worked in his family's firm, James Richardson & Sons, upon graduation, and continued to play hockey as well. When WWI began, he went overseas as member of the 14th Princess of Wales Own Regiment. He was promoted to Captain after the Battle of Saint-Julien, when he was the sole survivor of the No. 2 Company.

As a Captain, Richardson was known as a man who would never give an order he would not readily obey himself. He often used his own money to buy extra supplies, such as warm boots, gas masks, and cigarettes for his troops.

He was a casualty of war and died in France on February 10, 1916. Richardson was awarded the Legion of Honour by the French government, as well as the Order of Manitoba.

James Richardson donated the George Taylor Richardson Memorial Stadium as a tribute to his late brother.