Queen’s meets its 2020 emissions reduction target of 35 per cent, working toward net-zero emissions by 2040.

Embracing the Scarborough Charter is not merely a task to be completed but rather, an ethic which must be woven into our everyday actions and the fabric of our community.
Read the full statement

From the Principal: Admit them, admit them

The latest issue of the Queen’s Alumni Review reflects some of the breadth of that engagement in our university community.
Read the full article 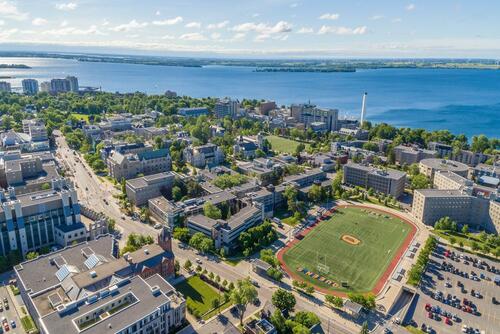 Queen's has achieved a 35 per cent reduction in emissions from 2008 levels thanks to a variety of initiatives, including major infrastructure projects.

Queen’s carbon footprint continues to shrink as the university has met its first major milestone target for the reduction of its greenhouse gas (GHG) emissions. Data from the recently released Queen’s GHG Inventory Report for 2020 shows that the university has achieved its goal of reducing emissions by 35 per cent from 2008 to 2020. This target is set out in the university’s Climate Action Plan, which has Queen’s on the path to achieving net-zero GHG emissions by 2040.

“Many years of hard work, significant funding from the university, and strategic initiatives by the province to build a clean electricity grid have led to this achievement. While a decrease in on-campus activity due to the pandemic and a relatively warm winter contributed to the lower emissions in 2020, the reduction from 2008 levels is the result of years of efforts by Queen’s to become more sustainable in its use of energy,” says Nathan Splinter, Manager, Energy and Sustainability. “Our overall trend shows we are on track to meet our next goal of reducing emissions by 70 per cent by 2030.”

“Queen’s remains committed to sustainability and achieving carbon neutrality. The latest emissions report shows we have made a good deal of progress toward our targets,” says Vice-Principal (Finance & Administration) Donna Janiec. “We have several projects underway and in development to move us forward, and we are continually exploring new opportunities to further reduce our carbon footprint.”

One of the projects that will soon be implemented, the Strategic Laboratory Revitalization project, addresses high energy use lab spaces. By making ventilation systems more efficient, the university aims to cut annual emissions by an estimated 1,750 MTCO2e.

Significant investment in the university’s infrastructure will be required to get to net-zero emissions by 2040, and options are being explored.

Additional strategic sustainability and conservation efforts are being advanced by the Sustainability Working Group and several sub-working groups, including those focused on alternative transportation, curriculum, and community engagement.

Read about the university’s goals for reducing GHG emissions in the Climate Action Plan.

Reducing GHG emissions is part of Queen’s work to advance the United Nations’ Sustainable Development Goals (SDGs). Recently, Queen’s placed first in Canada and fifth in the world in the Times Higher Education Impact Rankings, which assess universities based on their contributions to the SDGs.