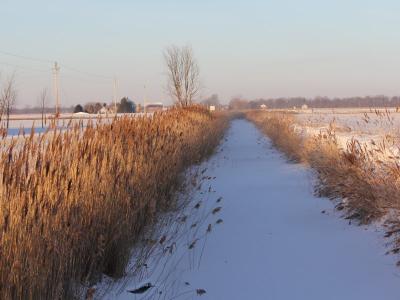 Historic wetlands in Chatham-Kent, once used for hunting wildlife and gathering medicines, have been extensively dredged and drained. Courtesy of Rick Fehr.

The efforts of our First Nation community partners to indigenize sections of the 2005 Ontario Provincial Policy (PPS) statement led to new wording in the 2014 version and brought attention to the presence and influence of First Nations in controlling development on and around their traditional territories. In 2015-2016 we began to investigate ways of monitoring the application of the 2014 PPS guidelines by municipalities, largely by analysing their Official Plans. We are interested in finding ways to measure municipal accountability to neighbouring First Nation communities. This work is ongoing as municipalities amend their Official Plans, in part, to comply with changes to the PPS. We hope to examine and compare Ontario municipal Official Plans before and after the implementation of the 2014 PPS; consequently, we expect that this work will extend well into 2017-18.

In 2016 we have begun to bridge our research on historical ecology with our policy and planning research. We are investigating how specific recommendations of the Ipperwash Inquiry are being implemented in Ontario at the municipal level, such as through the development of municipal archaeology plans. We are interested in how municipal archaeology plans reflect the cultural histories of Indigenous communities in Ontario, if at all, as cities are located on traditional and treaty territories of First Nations. We are also interested in the extent to which the content of municipal archaeology master plans have recognized First Nation communities, and in turn, how archaeology master plans may better inform the content and implementation of Official Plans. Finally, we have been expanding our team’s knowledge of the impact of Federal land management systems on Indigenous communities in different parts of Canada. Starting with the Prairies, we have been connecting with our research and planning networks in cities including Saskatoon, Regina, and Calgary. This mobilization of knowledge over the course of our project will assist our team to better investigate the relevance of our research to other Canadian and Indigenous planning and policy jurisdictions. We are also open to opportunities that may arise for investigating the relevance of this research to international contexts.

This research is led by Dr. Leela Viswanathan.